Worried about mould and condensation in your home? 7 things you should know...

Unsightly and unhealthy – mould, damp and condensation problems are surprisingly common in our homes.

While research by B&Q (diy.com) found a third (32%) of people in the UK have some form of mould, damp or condensation in their home, nearly two thirds (62%) wouldn’t be able to tackle mould themselves, and one in 10 say they’d do nothing about it – or only deal with it if it got really bad.

“Many problems can arise when you leave mould untreated – not just to your home, but also to your health – so it’s really important people are aware of the risks.”

Mould can cause respiratory problems and rashes – although B&Q found one in five people weren’t aware of the potential health implications.

B&Q have teamed up with the housing charity Shelter (shelter.org.uk) for the Break the Mould campaign, raising awareness around the dangers of leaving mould untreated, and showing people how to eradicate it permanently.

“People shouldn’t panic at a bit of condensation, but if it isn’t dealt with properly or quickly, it can lead to bigger problems such as black mould, and this shouldn’t be ignored.”

Edwards says it can penetrate walls and get into cavities, causing structural damage – and it can also lead to musty smells, staining, peeling wallpaper, cracked wall surfaces, plaster degradation, warped window frames and mildew on furniture and clothing.

“This can cost homeowners significant expense if not tackled in time,” he stresses. “But damage to the home is nothing compared to the health risks associated with condensation, damp and mould.

“Exposure to mould spores can also exacerbate eczema, and indoor dampness can promote bacterial growth and the survival of viruses.” 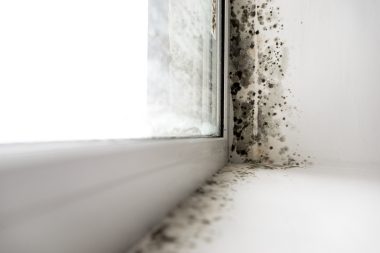 Photo of mould on a window. Picture credit : PA Photo/Nuaire.

Here’s what you need to know about mould and condensation, and how to get rid of it…

1. The causes of mould

Mould can be caused by bad ventilation, not heating your home properly, poor insulation, humidity, and condensation, says Break the Mould. Condensation is the most common cause of mould, so the campaign stresses the importance of opening windows and heating your home appropriately.

“This is particularly prevalent in winter as temperatures drop, windows get closed and households turn on their heating,” he explains. “The excess moisture in the air quickly condenses, and homes are at risk of condensation – experts call this the dew point.”

We produce water vapour every day through routine activities, such as drying wet clothes inside, cooking, boiling the kettle, showering, bathing, and even talking and breathing, explains Edwards.

This leads to increased indoor humidity – and without adequate ventilation, moisture gets trapped. It migrates from wet rooms, settling on the coldest spots on ceilings, walls and near windows – often in the corners of a room, on an outside wall.

“Once the warm, wet air has settled on a cold surface as condensation, it creates the perfect breeding ground for mould, which can be toxic,” he warns.

4. How to prevent condensation

“The best ways to permanently tackle condensation are by keeping a steady temperature throughout the property, keeping the air circulating and extracting excess humid air outdoors,” advises Edwards.

“Households can reduce levels of moisture in the home by drying clothes outside where possible, covering pans when cooking, shutting the bathroom door when showering or bathing, and ensuring extraction fans are switched on.”

To get rid of mould, you’ll need a mask, goggles, gloves, protective clothing, and a floor covering, says TV homes and interiors expert Whinnie Williams. Spray a mould remover spray onto the affected area, leave it for 30 minutes, and then scrub and wipe the surface with a cloth.

“Once you’ve removed the mould, keep the surface well ventilated and let it dry,” Williams suggests. “And to prevent it coming back, paint the area with an anti-mould paint, or if you’re renting, ask your landlord to do this.”

6. How to prevent mould

Ventilation is crucial, says Williams, so open windows or buy a moisture absorber – drawing moisture out of the air. Mould likes damp, dark spaces, so check behind cupboards and drawers.

“It can appear inside cupboards and get into clothes and shoes, so be sure to check in the corners on the inside, too,” she advises.

t’s also important to keep furniture at least two inches away from the walls, to provide space for ventilation.

The Break the Mould campaign says mould problems in a rented home are often a landlord’s responsibility. Renters should check what’s causing the issue and talk to their landlord before doing any work themselves.