As the much-anticipated UEFA Women’s EURO 2022 tournament finals are set to kick off in July, Alex Scott is hoping to inspire young women and girls to support the Lionesses, and jump into the beautiful game.

The former Arsenal player, Lioness and Team GB player is a remarkable role model, acts as a mentor to many of the current Lionesses, and has always been an excellent spokesperson for the women’s game.

But, the woman who inspired her to pursue her career was not a fellow footballer at all. It was her mum.

“Everything she had to sacrifice and do in order for me to play football and follow my dreams will never ever be lost on me,” Scott shares.

“I don’t think she understands the role she’s played in helping me get to where I am today.” 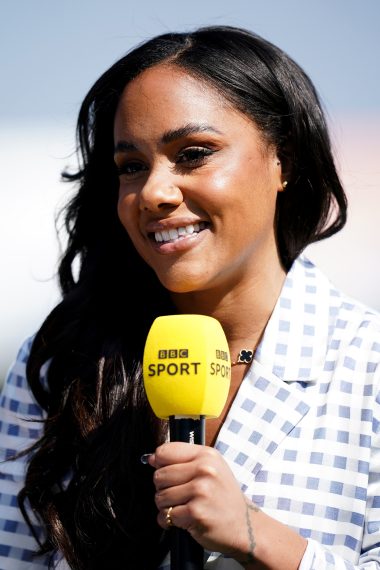 And her mother did make a lot of sacrifices, particularly as she signed to Arsenal, aged 8. Some parents may worry that letting their child immerse themselves in such a difficult career at a young age may disrupt their childhood, but Scott is so grateful her mother let her follow her dreams.

“It gave me a direction. If I didn’t have football, where would I be today? What kind of person would I be? It gave me confidence. It allowed me to express myself in an environment where I felt safe.”

She was able to grow up around amazing footballers and explore her potential, encouraged by friends and family.

Being surrounded by other sportswomen from an under-represented background also helped Scott realise her full potential, and two of her biggest role models in the sporting world are the Williams sisters.

“Everything they had to fight to overcome, they did with such grace. They never made excuses. It was like, ‘No, we will continue to be us and fight in our own lane’.”

But, little did Scott know when her career began that she would be such an important mentor and role model to so many people in the sport, not least, current England captain Leah Williamson – a lifelong Arsenal fan.

Scott admires Williamson’s drive and dedication, bringing her passion to the next generation.

“If you look at Leah, who has just been announced as England captain, her story and everything that she stands for, I think she’s going to be a huge role model for a lot of people coming through in the next generation. She’s amazing.”

Scott is also a LEGO ambassador, and as a national sponsor of the Women’s Euros, the brand has launched a new study revealing over three quarters (79%) of young girls look up to women who challenge old-fashioned gender expectations. Alongside the campaign, Alex has been visiting schools, talking about football, diversity and role models, and she has been touched by some of the experiences of the children she’s been meeting.

“This one boy said that when his head goes down, his coach gives him the motivation to keep smiling and keep playing. Oh my goodness – he just pulled that from nowhere! Sometimes, as a role model, you don’t know how impactful that could be to change the direction of someone’s life.”

If parents can show their kids diverse role models, role models from a similar background as them, or people who can inspire them to overcome barriers, Scott believes that can help a child immeasurably.

“It allows you to see something real in someone and connect with their story. If they’ve managed to go on and make something, whether it’s playing at Wembley or getting the job that they wanted, it gives you the belief. It’s that added inspiration that, ‘she made it, so can I, no matter my circumstances, or what card I’ve been dealt. I can change that’.”

Representation has a wonderful trickle-down effect, and in the 100 years since the FA banned the women’s game, we have been able to see these role models come forward and create a more inclusive space.

“In 2002, we had hand-me-down football kits from the men’s first team. And it looked like I was like wearing a parachute. Even having women with their own customised fitted kits is a step.”

With each generation of honest and brilliant female footballers, the sport has gone from strength to strength, showing the power of women and girls not only to inspire each other, but to inspire change in the industry.

The LEGO Group has launched ‘Play Your Own Way’ lesson plans to encourage children to celebrate the people that inspire them through play, in partnership with UEFA Women’s EURO 2022.