Are men lagging behind in the health stakes? 6 common issues and what to do about them

Being a man is bad for your health. Or so says Jeff Foster – and as a GP, male health specialist and a man himself, he should know.

“Compared with women, men not only have a greater chance of contracting almost every illness, but they die sooner too,” says Foster, who has now authored new book Man Alive: The Health Problems Men Face And How To Fix Them.

Part of the problem, he says, stems from the fact that as they grow up, males are “generally encouraged to avoid looking after their health” – despite the plethora of self-help books pitched at helping them gain six-pack abs and the body of an Adonis.

“As children, we’re told not to ‘cry like a girl’, and ‘man up!’, and this internalisation of health problems continues as we develop. As adults, men now live in a confusing society where we’re expected to look tough, have big beards and appear masculine, but simultaneously be happy to cry and open up about our weaknesses and fears.

“Men are conditioned to develop health practices and habits that increase their risk of disease and make it harder for them to seek medical advice when they need it.”

It doesn’t have to be that way, though.

“Bad health isn’t inevitable for men. The key is to empower men with the knowledge they need to understand their own bodies and minds.”

Here, Foster outlines six common men’s health issues, and how to deal with them…

“Nearly a million men are affected by low testosterone, and numbers are increasing each year. Testosterone deficiency, also known as andropause or ‘manopause’, mimics a lot of the symptoms seen in female menopause. However, it can affect men from age 30-90 years, it’s not guaranteed every man will get it, and for a large number who are affected, the symptoms are trivialised or just put down to working too hard, or mid-life crisis.

“Diagnosis is via a simple blood test, which has to be interpreted correctly, and in the context of the patient as a whole. Treatment involves fixing the cause, or going onto testosterone replacement therapy (TRT), which when used properly can be life-changing, reducing the risk of other serious medical problems, improving quality of life, and can save save jobs, marriages and families.”

“Around one in eight men in the UK will suffer mental health problems at some point, and globally, suicide rates remain higher in men. Male attitudes towards mental health remain resistant to change, and while I now see plenty of younger men with depression or anxiety symptoms, it’s still rare to hear a man over the age of 40 talk about his mental health.

“The reason for this is a combination of social, psychological, and hormonal pressures that result in many men failing to open up about their mental problems. But while it’s an uphill struggle, there are things we can do. The first thing is not to assume all mental health problems are psychological. Various medical problems can result in changes in the way we think and should be checked.

“Secondly, and most importantly, we need to start opening up. It doesn’t need to be with a doctor necessarily, but even a friend, or anyone we can open up to. Of course, there are medications, talking therapies and a range of other options available, but the key to changing male mental health is giving men the tools and social acceptance of being able to say, ‘It’s ok to cry’.”

“It’s said that if we live long enough, all men will eventually have some degree of prostate cancer. It’s the most common cancer in men, accounting for a quarter of all cancer cases. But despite this, we have no national screening programme. We can do prostate specific antigen (PSA) tests, but when taken in isolation, they are often useless. We’re able to diagnose and monitor those cancers that are mild and often don’t require aggressive treatment, but we often miss or can do little for those that grow and spread quickly.

“There are things you can do to reduce your risk of prostate cancer, including avoiding being overweight, exercising regularly, avoiding excess calcium, considering taking vitamin D, and getting a regular health check.”

“About half of men suffer with ED at some point, yet it remains a taboo subject. Men get ED for a reason; it could be due to neurological or metabolic causes (such as diabetes), anxiety or stress, hormone deficiencies, or narrowing of the blood supply to the penis. In fact, this last cause is so important, it’s accepted that if you have a vascular cause for ED, you have about three years until it affects your heart (resulting in a heart attack). The penis is a barometer of health. Pills like Viagra can be highly effective in treating ED, but only if you know the underlying cause.”

“Even with all the fitness, nutrition and wellness information available, obesity levels in men are still climbing every year. As a result, men have higher rates of high blood pressure, high cholesterol, type two diabetes, heart disease and stroke. When it comes to long-term sustainable weight loss, the best advice is to avoid diets that restrict certain foods (paleo, keto) and those that radically reduce calories – we just don’t know the effects on long-term health.

“When it comes to exercise, it’s far simpler: everyone should be doing it. There’s no single best type of exercise, but we’re not built to be sedentary, and exercise has been shown to reduce the risks of virtually every medical condition.”

“This seems like an odd topic to include, but both baldness and beard growth are becoming increasingly associated as significant causes of anxiety and depression in men. We’re told to just accept going bald, but it can really affect someone’s identity and body image. The issues apply to beard growth too, with ‘beard anxiety’ often seen in younger men who strive to grow a thick, bushy beard like their celebrity idols. As a result, the market for lotions and pills that claim to aid hair growth is enormous, but most of it is nonsense. There are well-established and evidenced-based treatments available for hair loss and hair growth, but always speak to a doctor to work out the right one for you.”

Man Alive: The Health Problems Men Face And How To Fix Them by Dr Jeff Foster is published by Piatkus, priced £14.99. Available now. 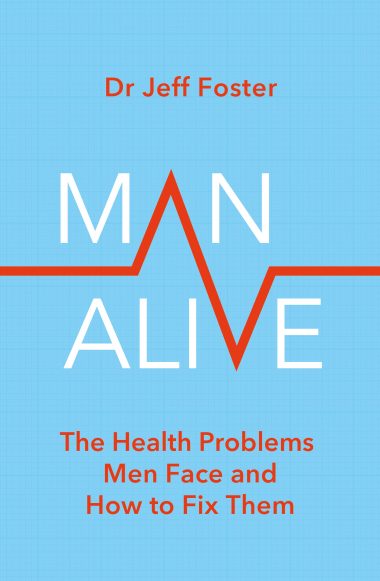