Becky Adlington: 'Every child should be able to swim 25 metres by the time they leave primary school' - The Coventry Observer

Becky Adlington: 'Every child should be able to swim 25 metres by the time they leave primary school'

She’s one of the greatest British swimmers ever – a multiple Olympic, World, Commonwealth and European medallist – but those lightning-fast swims are now just a fantastic memory for Becky Adlington.

These days, she likes nothing better than to swim at “plod” speed up and down at her local pool.

“I go swimming to switch off. I don’t go fast, I literally plod up and down.

“I only swim for 30-40 minutes, and I don’t use it as my exercise. I just go to switch off and think – it’s almost like my meditation, my yoga. I use it more for my mental health than I do physical.”

She laughs when asked if she ever has the urge to go fast.

“All my swimming friends – who’ve all retired, like me – say the same. None of us want to go hell for leather, it’s just a nice switch-off.

“Our bodies are so conditioned to swimming, I don’t even think about it. When you get in your car, you don’t think about how to drive, you just do it, and that’s exactly how I feel about swimming – I just get in – and that’s what I love.” 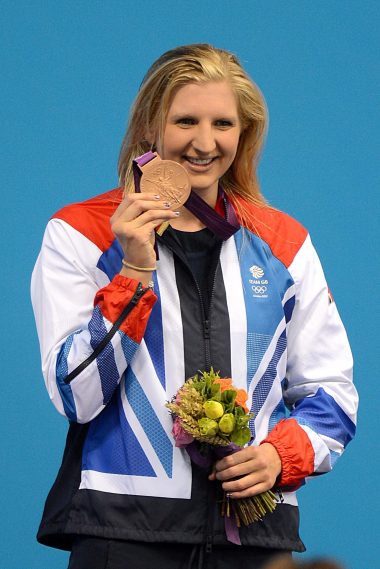 Photo of Becky Adlington with a bronze medal during the London 2012 Games. Picture credit: Tony Marshall/PA.

Adlington’s life still revolves around the sport however, as she runs the massively successful Becky Adlington’s SwimStars programme, which teaches children to swim with an emphasis on fun – ‘The Becky Way’.

There’s also BabyStars, for babies and youngsters aged up to three years.

Adlington says her mission is for every child to be able to swim 25 metres by the time they leave primary school, and she’s certainly on the road to achieving that – she says SwimStars alone teaches 14,000 children every week at multiple venues across the country.

“I much prefer this grassroots level,” she shares.

“A lot of people who retire from swimming go into the more elite side or coaching, but I so wanted to do the grassroots side, and I absolutely love it. It’s so rewarding with the children, seeing them having fun and gaining confidence,” she adds.

Adlington’s own children – Summer, seven, and Albie, 16 months – have weekly lessons too.

“Summer does enjoy swimming, but don’t get me wrong, she’s not the best I’ve ever seen, bless her! But she doesn’t need to be and I don’t care – as long as she’s safe in water,” says the sporty mum.

“She loves the water. When we go on holiday, she’s always in the pool and she’s a little fish in that way, definitely a water baby. But she’s not very competitive, she’s more creative, which is absolutely fine – I’m just happy she enjoys it. Albie absolutely loves his lessons too – he just splashes for half an hour, going crazy.”

Adlington stresses that you can’t be too young to start swimming – Summer was three weeks old when she first took her, and Albie was five weeks old (he would’ve gone earlier but it was during lockdown and pools were closed).

“The earlier the better,” says Adlington. “For starters, they’ve been in water for nine months in you, so they’re used to it. It’s about confidence too – they start developing fear from about three to five years, and they become fearful of the water. But if they’ve been in the water before then, they don’t have as much fear and it’s easier to get them in.

“One of the biggest barriers is confidence, it’s not actually children’s ability to swim – everyone has that ability, whether they’re three or 93 – but so many people are so scared to get in the water that it takes them weeks and weeks of coming [to the pool] just to get them to put their little toe in the water. It’s breaking down that fear, the earlier the better.”

Several drownings in open water during the recent heatwave have brought the importance of being a strong swimmer into sharp focus. Adlington stresses:

“It’s getting people to understand there are dangers from water year-round, and unfortunately it’s not one of those sports you can learn in two weeks and then you’ll be fine for your holiday. You need a good couple of months to get children confident, happy and safe in water.

“I don’t think people really see swimming as a life skill, they see it as a great Olympic sport and love to watch it, but they don’t really see that life skill part. It’s about changing that attitude.”

And doing her best to help change attitudes towards swimming means Adlington’s swimming lessons programme is now her full-time job. She shares child-caring duties with her husband Andy Parsons – Albie’s dad (Adlington had Summer with her first husband, Harry Needs), and makes time for regular gym visits too.

“I do classes two or three times a week for 45 minutes, so they’re perfect – I’ve done my bit, been healthy, and on I go with the rest of my day,” she says. “It doesn’t take up too much time – I don’t have the time to go to the gym more.”

Adlington says they try to eat reasonably healthily as a family too – particularly little Summer, who’s been vegetarian since she was about four.

“We’re not massive meat-eaters in our house and we very often eat vegetarian meals, trying to reduce the amount of meat we’re having, although we’re not vegetarian,” explains Adlington. “But three years ago, Summer said, ‘Mummy, these chicken nuggets, are they chicken?’ And I said ‘yes’, and she just said she didn’t want to eat animals!

“She totally decided it herself, and to be fair to her, in three years, she’s never asked for any meat, and she wants me to check everything’s vegetarian. So if there’s a party and there’s a packet of sweets about, she’ll ask me to check they’re vegetarian. She completely leads it, so fair play to her.”

As for her family’s general diet, Adlington says:

“I wouldn’t say we’re super-healthy – if we’re out and about, we’ll get a slice of cake or sit and have an ice-cream with the kids, so we definitely indulge when it’s nice to. But at the same time, we’re not having takeaways and we love to cook, so we’ll make meals from scratch.

“We’re just a normal family with our food,” Adlington reflects. “I class it as everything in moderation and balance.”