Celebrities flocked to the red carpet on Saturday night to honour the UK’s bravest and best as part of the Pride of Britain Awards 2021.

Hosted by Carol Vorderman and Diversity’s Ashley Banjo, the awards ceremony at Grosvenor House Hotel in London got off to a bang with the arrival of this year’s winners on the red carpet.

Winners this year include Hughie Higginson, 10, and Freddie Xavi, 11, who raised more than £200,000 after Hughie was diagnosed with leukaemia – and part-time firefighter Stephen Warton who jumped into an icy lake to save the life of 13-year-old Kacper Krauze.

“I’m feeling good, really excited. I don’t take any event for granted. The last time we did Pride of Britain we had no audience so it’s nice to be back. It feels good.”

They were celebrated by some of the country’s biggest stars who said they were delighted to attend.

Judges this year included Ben Shephard, who said he was humbled to be a part of Pride of Britain.

“I’m very excited to have the awards on properly. It’s a very different event to last year when it was virtual. Susanna (Reid) are presenting the Fundraiser of the Year Award and we are excited about that.

“I sat on the judging panel this year which was a tough and incredible experience. It was a very humbling experience.” 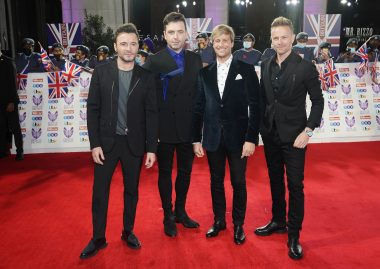 Westlife arrive for the Pride of Britain Awards held at the The Grosvenor House Hotel, London. Picture date: Saturday October 30, 2021.

Hollywood actress Sharon Stone said she had prepared for an emotional evening.

“I’ve got a pack of Kleenex. It’s really amazing and these stories that we’ll hear are so touching and capture what people have been through.” 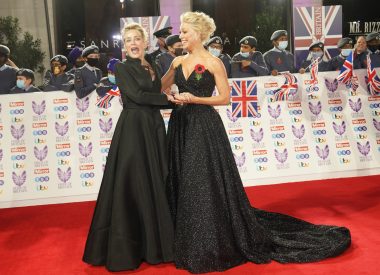 Tom Parker, from the Wanted, and his wife said the awards put things into perspective after a trying year.

In October last year, the singer revealed he had been diagnosed with an inoperable brain tumour. Just last month, he joined his bandmates to put on a special performance at the Royal Albert Hall to raise funds for Stand up to Cancer.

“It’s always an emotional occasion, but one of gratitude.

“We’ve had a major trauma ourselves the last 18 months and for Tom and for me, to listen to stories ourselves puts things into perspective.”

EastEnders actor Danny Dyer also said he would probably shed a tear at hearing about the courage and bravery of the nominees during this year’s awards.

“It’s a very humbling experience. I have to try and not sob my heart out at every single story.”

However, the actor, known for his hardman roles, would not be drawn on his political views, and when asked what he thought about the upcoming Cop26 summit in Glasgow, he said:

“I’m trying to stay calm around it at the moment.”

Bear Grylls, however, said he would be heading to Glasgow to represent World Scouting.

“It’s never been a more important time for our planet and for the leaders to come together and make a difference to the world.

“Let’s hope there is action, not words. If you love something, you want to protect it. That’s the goal.”

He added the Pride of Britain Awards are “always special” and the “most important of the year to celebrate the true and unsung heroes in the country”.

A hightlight was when Ed Sheeran performed a surprise duet with one of his biggest fans and a Pride of Britain Award winner.

The superstar singer surprised Harmonie-Rose – who has raised more than £100,000 for charity doing things doctors said she would never do – by appearing in a huge pink unicorn cake at an earlier party for her.

Ed then sang with Harmonie-Rose, and the duo performed two of her favourite songs, Shivers and Perfect together.

Harmonie-Rose, lost her legs and arms to meningitis as a baby and was left in such a critical condition she was given just a 10% survival rate. 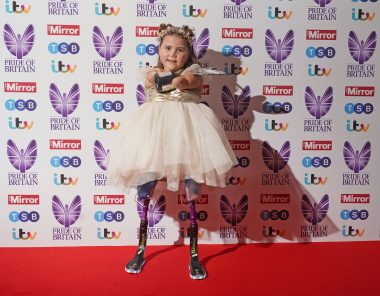 Harmonie-Rose Allen with the Child of Courage Award in the press room during the Pride of Britain Awards.

Doctors made the tough decision to amputate parts of her arms and legs and the tip of her nose after they became infected.

Since then, Harmonie-Rose has taken her first steps and put them through the Bath half marathon. Then in lockdown she launched her 2.6 Challenge, hurtling through the six things doctors said she would never do including running, singing, gymnastics and jumping.

She also raised £20,000 for an accessible playground by scaling a climbing wall 100 times and running 500m for the first time on her blades.

The Pride of Britain Awards will be broadcast on ITV on November 4 at 8pm. 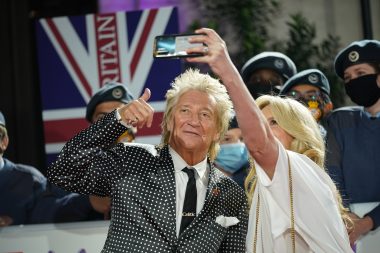 Rod Stewart and Penny Lancaster pose for a selfie as they arrive for the Pride of Britain Awards. Credit: PA Wire/PA Images. Picture by: Yui Mok