Everybody’s Talking About Jamie - ‘Being gay myself, this is a story that I want to tell’ says lead

If there’s one word to describe the musical Everybody’s Talking About Jamie, it’s “joyful”.

Inspired by true events, and set in a working-class English town, there’s now a new film based on the award-winning West End show which follows Jamie New, played by newcomer Max Harwood. The teenage boy has a hidden dream: to be on the stage as a fierce and proud drag queen.

“I remember watching the West End show initially and seeing a queer, effeminate person as the lead role in the centre of the story, not being victimised and not dying at the end of the first act, and I was like, ‘Wow, this is a story that’s centred on a queer person winning!’”

“It felt like something that I hadn’t seen a lot of. And being gay myself, this is a story that I want to tell.” 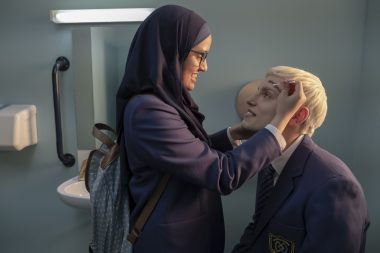 While Everybody’s Talking About Jamie has plenty of upbeat moments – catchy songs, a heart-warming dynamic between the youngster and his mum, Margaret (Sarah Lancashire), and a funny, tender friendship with classmate Pritti (Lauren Patel) – Harwood notes the film does “touch on some incredibly potent topics”.

Jamie faces plenty of adversity in his quest to make his debut stage performance; teachers are not encouraging about his aspirations, there are bullies at school, plus his own dad (Ralph Ineson) is struggling with being a supportive parent.

But what really comes through whilst watching this colourful and moving feature – which also sees Richard E. Grant portraying a drag queen named Miss Loco Chanelle – is the theme of embracing who you are. This is something Harwood reflects he has experienced himself while working on the project.

“This film has been a huge part of that process of me discovering who I am. I grew up with not a lot of queer representation and queer people in my hometown, so when I moved to London and started working on this project and got to work with three queer creatives, and work and meet so many more people, my universe expanded, because I was seeing and interacting with people that had lived experiences as queer people.”

“I’m so grateful to my team, who have not made me dampen my queerness. It’s been celebrated in this film in a way that’s not being like, ‘Oh, aren’t you worried you’re going to get typecast?’, which is usually a question people ask people who play roles like this in the past – but I feel like I’m so much more than my sexuality.”

Harwood agrees the representation in the story is poignant for the times we are living in now.

“I feel like if you can see something, you can be it.

“We’ve just spent almost two years of our lives at home and we’re now going back out into spaces and kids are going back to school and back in the classroom, and it’s really important that we’re going to be able to share a film that is about people stepping into themselves.

“As we all step out into this new world, we have hopefully a nice, joyous film that’s going to encourage people to do that boldly and bravely, and with loads of joy and love in their hearts. It’s the perfect time for this film.”

The show has been such a big success, it’s now touring around the world, to places like Korea and LA, and there has been huge anticipation surrounding the adaptation. Bolton-born Patel, 20, says that is “because this story resonates with so many people and not just young people”.

Discussing the appeal of her character when she read the scripts, the young star notes how it is “unfortunately very rare” to see a role in musical theatre like Pritti, that is “specifically for a Middle Eastern, North African, South Asian girl”.

“But it was a real comfort to me that that existed, and so being able to translate that on-screen was indescribably amazing. It just feels like such a privilege.”

Patel remembers how she was in a classroom in Bolton, studying for her BTEC in drama, when she got a phone call about getting the part in Everybody’s Talking About Jamie. She exclaims:

“But I was very lucky that everybody around us gave us so much support. We worked with an incredible acting coach, dialect coach, choreographer, and so they never let me step onto set feeling underprepared.”