Gardening Time: Tackling the nuisance of grey mould on plants - The Coventry Observer

Gardening Time: Tackling the nuisance of grey mould on plants

HANNAH Stephenson offers the lowdown on grey mould, one of winter’s most prevalent plant diseases.

It’s already blighted my cyclamen in pots, has enveloped the leaves of my ornamental cabbages, and left the base of other plants in soggy tatters, says Hannah.

Grey mould, or botrytis, is one of our most common winter problems, a nuisance fungus that emerges during damp weather, invades greenhouse plants in cool and humid conditions, or attacks plants that have an open wound left by something else.

What are the symptoms?

It covers stems, foliage and fruit with a soft grey fluff and can seriously damage crops.

While outdoor attacks are most common during wet weather in summer, when high temperatures and humidity prevail, in winter grey mould is most likely to happen under glass, when plants are at the lowest point of their annual growth cycle, producing a mass of vulnerable decaying foliage.

Which plants are affected?

So many plants can be hit by botrytis, including chrysanthemums and gladioli, tomatoes, onions, geraniums and a host of other plants. 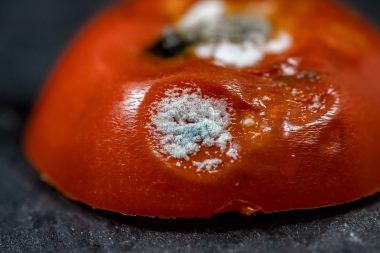 It is common on apples, grapes, strawberries, raspberries and currants, while vegetables affected include beans, brassicas, cucumbers, lettuce, peas, potatoes and celery and carrots in store.

Once it takes hold it can spread rapidly and damage is severe and can cause fruits to be completely destroyed.

Snowdrops can also be affected and whole clumps may need to be removed and burned to avoid the mould spreading to other plants.

Where is it most active?

Greenhouses are one of the most common spots for grey mould to be active and if you are not careful, you can quickly lose whole trays of seedlings to it.

Be aware that botrytis thrives in cold, damp conditions and will soon invade weak plants and dead and rotting vegetation.

Once the fuzzy grey fungal growth appears on foliage, causing it to discolour and rapidly deteriorate, the disease may then spread into the main body of the plant.

Fungal spores are spread on air currents or by rain splash, and infection is most likely where the plants are damaged, perhaps by a slug attack or frost crack. Once an infection occurs on a vulnerable plant, the fungus will likely spread into living cells, causing them to die. At the same time the mould, which comprises spore-bearing growths called conidiophores, appears on the surface.

Woody plants – including gooseberries, raspberries and even roses – may suffer from dieback after their leaves wilt and shrivel, changing to brown. Bark cracks and in humid conditions the mould appears.

If conditions are not suited to the germination of the spores, maybe because of low temperatures or low humidity, they will lie dormant until the right conditions emerge.

Indeed, grey mould spores are present all over the garden and because the fungus can live in so many places on so many plants, it’s pretty hard to avoid them entirely.

Can you stop it?

You can prevent it if you stem the conditions in which it thrives, so you need to sweep dead leaves off the garden, ventilate the greenhouse to try to reduce humidity and burn all affected material.

Under glass you also need to reduce the amount of watering you do and increase the heat a little.

It’s worth pruning an affected plant by cutting out the infected area at a point well below the last point of damage.

Ensure all plants are adequately spaced because damp and overcrowded outdoor crops can also become a haven for grey mould.

Also, make sure you check any crops stored are adequately dried before being placed in store and are inspected on a regular basis.

Any showing signs of disease should be removed immediately to avoid the spread of infection.

Deadhead all flowers which have signs of grey mould.