GARDENING TIME: Weeding out the ‘enemies’ of the garden

THEY’RE the bugbear of every gardener – weeds. Your garden is awash with colour and all neatly preened when you spot one rearing its ugly head.

We all work hard to get the best out of our prized blooms and crops but the perennial pests that are garden weeds are a constant menace trying their best to spoil the party, writes James Iles.

Weeds not only compete for space in the borders but they also consume valuable moisture too so it’s just as important to root out these imposters before they push out the good guys or set seed ready to haunt us another year.

First of all you need to know your enemy – it would be a crying shame to root out the young shoots of a genuine perennial you bought last season or annuals seeded earlier in the year.

I work on the basis that is ‘A weed is any plant growing in the wrong place’ so whereas wildflowers like daisies and forget-me-nots may be welcome as ‘wildflowers in the right place’, they are weeds in the wrong site while other more invasive plants like mint or bindweed are instanly classed as weeds given their hostile and aggressive habit.

Broadly speaking, there are annual weeds that grow from seeds left from a previous season and perennial weeds who have an underground roots system or rhizome they try and embed in borders or lawns making them tricky to oust.

Dandelions and docks are easy enough to dig up but nuisances like horsetail and couch grass are harder to stop in their tracks.

Weeds that appear in exposed soil in the spring or freshly dug over soil need a swift riposte so it pays to have a reference book with pictures until you learn to recognise weed seedlings. 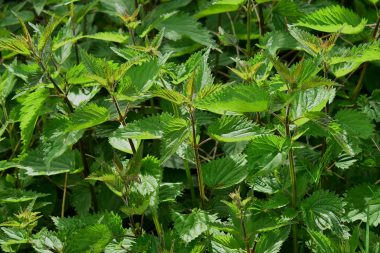 Sting in the tale – Nettles are a real pain for gardeners. (s)

Pull them out as seedlings trying not to mix them up with your flower or vegetable seedlings.

Only compost them before they seed or you will simply spread the problem around the garden.

Perennial weeds like bindweed, dock, thistles, couch grass and creeping buttercup should be hoed out in their infancy as they may not pull out completely once established and flowering.

There are also some more severe weeds that will require tougher methods such as the bramble which has deep roots and really needs a flame gun to burn it out.

Japanese knotweed is often in the headlines such is its villainy. Again a flame gun on new shoots is the best remedy else you will have a giant problem in your garden.

One that I find a common foe is the sycamore seedling which if you live near a wooded area you will know too.

They grow very fast from the twin-leaved seedling into the recognisable sycamore shaped leaves and should be tackled early on when they will pull out easily otherwise saw them off close to the ground and cut off fresh shoots.

So, how to prevent attack from the enemy army of weeds? Favouring organic techniques, I would of course advise against chemical sprays in general, especially in amongst your borders where you could claim some innocent casualties with the friendly fire of a trigger gun!

However on paths around your garden, the classic creeping weeds and grass and moss that inevitably accumulate can be treated with organically-sourced sprays, available at most garden centres and DIY stores.

A layer of chipped bark or leaf mould will suppress weeds around a garden with larger spaces between plants.

Bark is long-lasting and will only need an occasional top up, probably where you’ve added new plants.

In gravel gardens or for stone pathways always use a weed-proof membrane underneath the aggregate and replenish stones where necessary in the future. The membrane should be black polythene, woven polypropylene or a similar landscaping material.

The best solution though is to accept you will have to physically remove most border weeds by hand or with a Dutch hoe.

Using the hoe, you should push and pull the blade to slice off the tops of the weeds just below the soil surface and leave them on top of the ground to dry out in the sun hence it is best to do this on a dry sunny day.

It can seem daunting but if you incorporate it into your weekly garden tasks then you will stay on top of it.

Little and often will go a long way with weeding.

The most simple way of keeping weeds at bay is to get your planting scheme so well organised that their isn’t an inch to give to weeds to prosper in.

This is a real cottage garden approach to the problem and costs nothing extra.