How long do you leave your Christmas decorations up for?

Whether you’re going by the traditional book or just want everything cleared up after Boxing Day, Lisa Salmon ponders when to ditch the decs. 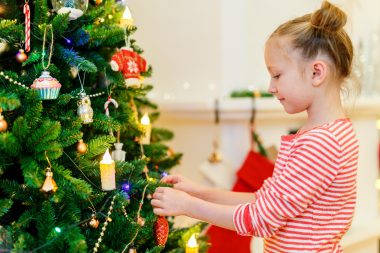 It’s magical when Christmas decorations first go up and your home is full of glittering tinsel and baubles and twinkling fairy lights, as well as the festive pine smell of a real Christmas tree if you have one.

But that magic soon disappears – and once Christmas is over, you’ve no doubt got pine needles, stray baubles and bits of tinsel all over the floor, and that lovely Christmas tree smell has been replaced by a musty one as your tree slowly dies. Many people are ready to just get rid of the decorations as soon as Boxing Day is done, so they can start the New Year clean and tidy (and without pine needles sticking in their feet). For others, the festivities aren’t over just yet.

So when should you take your decs down? Is it OK to whip them away as soon as possible, or is that simply bah humbug behaviour?

Certainly, most people will leave their decorations up a little longer than Georgia Schofield, who takes hers down by 11pm on Christmas Day! But she has a very good reason – it’s her daughter’s birthday on Boxing Day and she doesn’t want Christmas to take the shine off her daughter’s big day.

The mum’s video of her taking down the tree went viral on TikTok, and she later explained:

“If my birthday was the day after Christmas, I could think of nothing worse than having the tree up. That’s why I take it down just to try and make it as normal as possible for her.”

But, assuming your child’s birthday isn’t during the festive period, you may well want Christmas to last forever and keep your decorations up as long as possible. And you’re in good company, as the Queen keeps her decorations up until February 6, to mark the anniversary of the death of her father, King George VI.

If you want to follow tradition, however, rather than the Queen, decorations are ‘supposed’ to come down after the 12 Days of Christmas, which is counted by the Church of England from Christmas Day until Twelfth Night on January 5. But it’s not quite that simple, as other religious groups, including Catholics, count the 12 Days of Christmas from Boxing Day. So January 6, which is the day of Epiphany, when the three wise men came, is Twelfth Night.

So around January 5 or 6 is when religious tradition dictates the tree and tinsel should disappear.

Legend has it that it’s bad luck to keep the decorations up after that – in ancient times, people believed tree spirits lived in the tree, holly and ivy etc that decorated their homes, and bringing them inside during the harsh winter protected the spirits. But if they weren’t returned outside after the cold festive period, vegetation wouldn’t grow again and there’d be an agricultural disaster. Plus, if the greenery was left inside too long, they thought the naughty tree spirits would cause mischief in the house.

Plant experts from the floral gift company Flowercard (flowercard.co.uk) think January 6 is the day you should take your decorations down, and Flowercard’s Liam Lapping says:

“The 6th of January is Epiphany and is the official end of the festive season. Keeping your Christmas tree and decorations up after this date is thought to bring bad luck. However, if you have a real Christmas tree and it’s looking a little worse for wear there’s no harm in taking it down early – no one wants a needle-less tree.”

He urges people to replant Christmas trees that still have roots, or recycle other real trees, pointing out that many councils have a Christmas tree recycling service, or trees can be taken to the garden waste section at local tips.

“However, if you have an artificial tree, there’s nothing stopping you from keeping your Christmas tree up even longer and following in the footsteps of the Queen,” he adds.