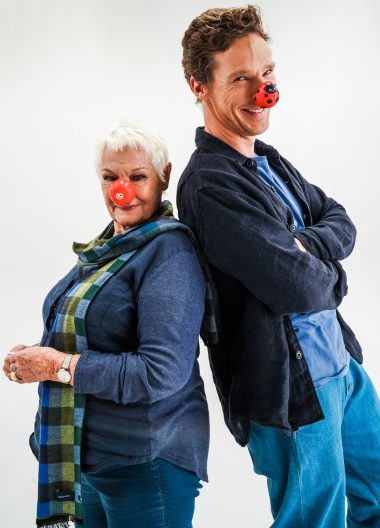 The event returns next month and this year features the Share A Smile initiative, which aims to bring the country together using humour.

Actress Dame Judi, comedian and Comic Relief co-founder Sir Lenny and actor Cumberbatch have been joined by a string of other famous faces to launch the fundraiser.

The stars have appeared in a short film in which they discuss how comedy has helped them in their lives.

The video also features Comic Relief projects such as the Inverclyde Shed, an initiative in Glasgow which aims to combat loneliness.

Money raised this year will go towards tackling issues such as homelessness, domestic abuse and the stigma around mental health.

Funds will also be donated to support those affected by the coronavirus pandemic.

Dame Judi said: “Red Nose Day is something we can all enjoy, and goodness knows during this lockdown everyone has relied so much on television and seeing as many films as they can.

“I look forward to it enormously. I hope we all have a wonderful laugh and at the same time donate something as it goes to a very, very good cause.”

Sir Lenny said: “We all need cheering up, so this year Red Nose Day will be a bit different.

“Of course we want to raise as much money as possible for people who really need it in the UK and around the world.

“But we also want to make you smile and bring you some laughter over the coming weeks!”

The programme will feature Dawn French in a special segment of The Vicar Of Dibley and Tennant and Michael Sheen in the comedy Staged.

Comic Relief has raised more than £1.4 billion over 35 years.

The red noses for this year’s campaign are plastic free and made from plant-based materials.

There are a range of 10 different characters depicted on the noses, which can be bought in supermarket Sainsbury’s or at comicrelief.com/shop.

Click here to meet Nine-year-old Ethan who loves singing, baking and making people laugh. At 14 months old, he was diagnosed with cerebral palsy and doctors said he would never sit unaided, crawl, walk or run. Thanks to a brilliant project funded by Comic Relief, he’s now at mainstream school and loves running around and playing football.

To get involved with this Red Nose Day which will take place on March 19 please visit: http://comicrelief.com

Or you can follow Comic Relief on social media: