Motoring: BMW M3 is still one of the best performance cars you can buy - The Coventry Observer

Motoring: BMW M3 is still one of the best performance cars you can buy

The BMW M3 is a well-known name across the world – but how can this latest car build on a longstanding reputation? Jack Evans finds out.

For decades, the BMW M3 has stood as the firm’s performance backbone – evolving and morphing throughout the years, but always retaining an ability to provide spacious and practical motoring, with a significant focus on being as good to drive as possible.

Now, there’s a new version – the latest G80-generation car promises even more than before, and arrives with all manner of new features and performance enhancements. So, can it bring something new to the table, while delivering all of the aspects expected from an M3? 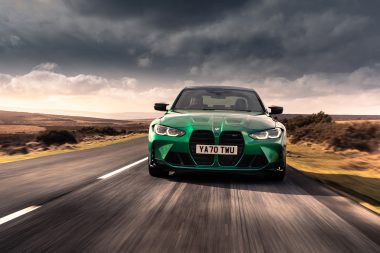 As one of its key go-faster models, BMW’s M Division has given the works to its latest M3. We’ve got a new engine, a longer, wider body and a fresh face that’s caused quite a stir.

There’s also the option of all-wheel-drive for the first time, though our test car, being one of the first in the UK, came in the classic rear-wheel-drive configuration.

But most importantly for an M3, we’ve still got four doors and a decent boot, meaning that BMW hasn’t done away with practicality for this latest model.

WHAT’S UNDER THE BONNET?

The M3’s engine might sound the same on the face of it – it’s still a twin-turbo, six-cylinder 3.0-litre petrol like you’d find in the older car – but it’s a far different beast to before.

For starters, we’ve got a lot more power; the UK is only getting top-tier Competition models, which come with the full-beans 503bhp and 650Nm of torque – considerably more than the 460bhp and 600Nm you’d find in the old M3 CS.

It means that this latest-generation car will crack 0-60mph in just 3.7 seconds and power onwards to a top speed of 155mph – or 180mph if you tick the box for the optional M Drivers package.

Drive is, in this instance, sent to the rear wheels alone through an eight-speed automatic transmission.

A sports exhaust provides a suitably raucous sound, too.

The older M3 had a reputation for being somewhat spiky. It was a car you couldn’t take liberties with – particularly in the wet – and if you didn’t treat it with caution, it’d quickly come back to bite you.

It does, on initial impressions, seem like BMW has addressed this issue with the latest M3.

This is a fearsomely easy car to drive at a quicker pace.

The steering is one of the biggest changes here; whereas before the old car’s wheel became overburdened, weighty and a bit rubbery at times – particularly in sport modes – in this M3 it’s properly weighted and feels correctly connected to the front wheels.

Then there’s the engine. Strong and purposeful, it has all of the performance you could want from a road car. The shifts come thick and fast when making progress, but snappy gearchanges from the pleasantly finished carbon-fibre paddles mean swapping cogs is another hugely positive part of the experience.

The level of grip you can achieve through longer, sweeping bends is far beyond what you would’ve found before, while the new adjustable traction control system will mean that even novice drivers can the best from the new M3.

HOW DOES IT LOOK?

Looks are, of course, very individual – but boy has the M3’s design got tongues wagging.

It’s all down to those front vents, which have been lessened in visual impact due to the fitment of the number plate ahead of them – though they’re still hard to miss. It’s very spec-dependant, mind, with brighter colours emphasising the new kidney grilles and darker shades playing them down.

The M3 is, in our opinion, the looker of the pair between it and the coupe M4, with the saloon’s slightly elongated proportions helping the design to ‘fit’ a little better. 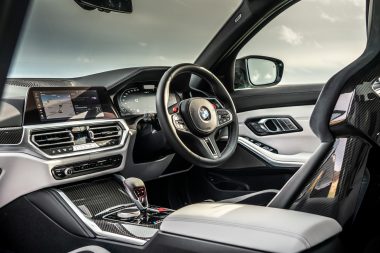 It’s actually inside where things are the least revolutionary. It’s standard BMW fit-and-finish here, with an excellent driving position helped no end by the carbon-backed bucket seats.

They’re also heated and electrically adjustable, unlike many other bucket seat options.

The M3 also has the added benefit of easy access to the rear of the cabin, where you’ll find a decent amount of both leg and headroom. Even taller passengers will be able to get comfy back there. And, when it comes to boot space, there are 480 litres on offer. It’s also nicely square, which will help when loading larger or bulkier items into it.

You do get plenty of standard equipment for that amount, mind you, with features such as a Harman/Kardon stereo, on-board wifi hotspot and wireless phone charging included from the off.

Crucially, you still get M Adaptive Suspension – which is a necessity for making the car more pliable over rough surfaces – and an M Sport differential included as standard, which means you don’t have to pay more in order to make the M3 the best it can be dynamically.

Our car had some choice options added to it, including the aforementioned seats, a comfort pack consisting of a heated steering wheel and electric boot lid (£990) and high-performance Laserlights which, though steep at £1,500, are well worth adding for cutting through the murky weather which the UK so frequently suffers from.

This latest M3 feels like a very different animal to the car it replaces.

It’s no less exciting, visceral nor focused; it’s still a car with one steely eye firmly fixed on crossing ground extremely quickly, yet can still offer all of the space and comfort you need on a daily basis.

But it’s far easier to tone down than before.

It isn’t ‘on’ all the time like the F80-generation car was, which makes it a much more enjoyable car to drive.

Say what you like about the looks, but this latest M3 is easily one of the best-driving performance cars to go on sale in 2021.

FACTS AT A GLANCE 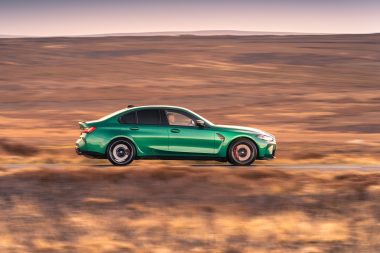