The new James Bond film No Time To Die has taken more than £50 million at the UK box office after just two weekends on release – enough to already make it one of the top 10 highest-grossing 007 movies of all time.

The latest big screen instalment in the long-running spy series, which sees Daniel Craig play the famous secret agent for the last time, had made £52.7 million as of October 10.

This means it is currently eighth in the list of most successful Bond films in the UK, just behind 2002’s Die Another Day (a total box office of £55.5 million), in which Pierce Brosnan played 007, and 1979’s Moonraker (£55.9 million), which starred Sir Roger Moore in the lead role. 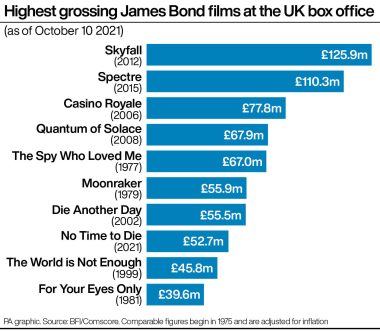 All figures have been compiled by the British Film Institute and have been adjusted for inflation to 2021 prices.

Comparable UK box office data began in 1975 – which means no films starring the original 007, Sir Sean Connery, make it into the chart.

Craig’s swansong as 007 after 15 years in the role is already the highest-grossing film at the UK box office in 2021 so far. But that title could yet be challenged by one of a number of blockbusters due for release before the end of the year, including Dune, West Side Story and Spider-Man: No Way Home.

The highest-grossing film of all time in the UK is 2015’s Star Wars: The Force Awakens, which – adjusted for inflation – has taken more than £140 million.