Ozzy Osbourne's son: 'I am Iron Man!' - The Coventry Observer

On Sunday 3 October Louis will be embarking on the challenge of a lifetime. This will see Louis swim an astonishing 2.4 miles in the sea, take on a mammoth 112 mile bike ride, before finishing off his incredible challenge with a 26.2 mile run.

When asked how he was feeling about the event Louis said:

“Truth be told I am terrified of this event. It’s a huge undertaking, I’ve done all the training and preparation for it, but I know how hard it’s going to be. My mantra the whole way through the past seven months has been ‘I chose this.’

“I chose to be terrified by taking part in this event, but I will come out the other side, hopefully feeling accomplished, and no doubt very sore and exhausted!”

“I have decided to raise money for two charities. One being University Hospitals Birmingham Charity who provide support to frontline staff who are coping with the stresses and trauma of working though the pandemic, including the provision of counselling services and wellbeing hubs in their hospitals. The other being Acorns Children’s Hospice, who provide care and support for terminally sick children and their families. 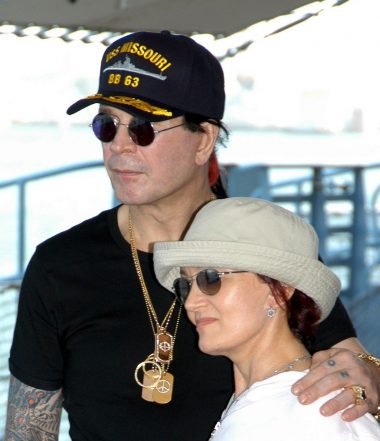 Photo of Ozzy and wife Sharon. Iron Man Louis, who lives in Birmingham bears a striking resemblance to his rock star father.

“Unlike me, the people I am hoping to help didn’t chose to be terrified and to have to deal with such huge trauma, so any contributions you can make to watch my temporary self-inflicted pain will hopefully help alleviate some of theirs.

“My Dad said at the start of one of Black Sabbath’s very well known records ‘I AM IRONMAN’. Hopefully before midnight on Sunday 3 October I’ll be able to say the same!

“I chose to set my target figure of £14, 060 to represent £100 for every mile of the race. It does seem like an incredibly large amount to raise but I’m going to give it my best shot.”

“We are so grateful to Louis for taking on this epic challenge to support our staff, who have been absolute heroes during the pandemic, going over and above every day for their patients.

“We are proud to support them in any way we can and it is thanks to people like Louis that we can continue to fund vital mental health support. We wish him the very best of luck in Barcelona and can’t wait to hear how he gets on!”

If you would like to support Louis please visit his fundraising page here.