Paralympian Stef Reid: Sport transformed my life – and I want the same for all young women

After losing a limb, Stef Reid found resilience through athletics. She tells Abi Jackson why it’s so important we support girls to stay in sports. 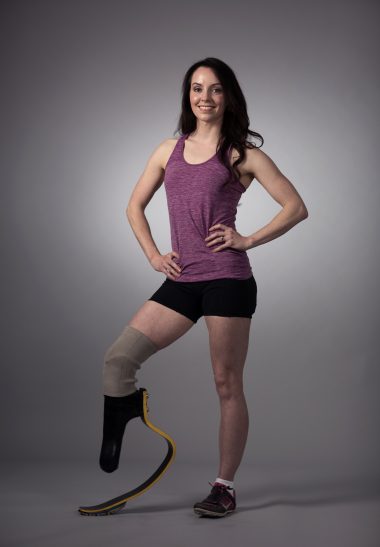 This past year-and-a-half has highlighted many things, not least that physical activity truly is a lifeline. For Paralympian long-jumper and runner Stef Reid, the benefits of exercise – sports in particular – are loud and clear.

“Sport was the thing that saved me after my accident,” says Reid, 36, who lost her lower right leg and foot aged 15.

“It was the catalyst that transformed my life, how I thought about myself and what I thought was possible. It gave me my confidence. I want that for every young woman.”

As it stands though, many are missing out. The sports gender gap is no secret, and while lots of people have been doing amazing work to change it, there’s still a way to go.

Nearly one in three girls drop out of sport during puberty, according to Always, who recently surveyed 1,000 girls and 1,000 adults. They also found 50% of women who let go of sports as teens later wished they’d stuck with it.

Reid has teamed up with Always on their mission to keep girls playing. In partnership with UK charity Sported (sported.org.uk), which supports community groups helping kids and young people overcome barriers to reaching their potential, the brand has already awarded more than 130 grants to grassroots projects.

The power of sports

It’s a cause Reid, who is currently counting down to the Tokyo Paralympics, starting August 24, is hugely passionate about.

There’s no ‘good age’ to lose a limb, of course, but at 15, Reid – who’s always been very sporty and originally had her heart set on becoming an international rugby star – had a lot to deal with.

“The obvious one was dealing with a life-changing injury that was never going to get better, it was just, ‘You’re going to have to deal with this’, together with my life’s dream, the thing I loved, now not being an option. On top of that, I was 15. When you’re a girl going through puberty, the last thing you want is something that makes you different.

“So there were all these different layers. My confidence was knocked and I just wasn’t sure of myself, of who I was, of what made me valuable, I didn’t like the way I looked. It was a tough space to be in.”

Eventually, Reid found her way to athletics – and international success with it, scooping silver at both the London 2012 and Rio 2016 Paralympics, working her way up to gold at the 2017 World Para Athletics Championships.

The confidence and motivation honed in athletics spread to other areas of her life too: she gained a full scholarship to study biochemistry at Queen’s University in Canada (where Reid grew up before moving to the UK), has also weaved modelling and broadcasting work into her career, and reached the semi-finals of Celebrity MasterChef in 2018.

This didn’t happen overnight though. Reid’s resilience and positivity shine, but she acknowledges:

“These are lessons I’ve learned over, gosh, almost two decades now. It took time, there is no quick-fix for these things. I would probably say it took around five years after the accident until I woke up and could say, ‘I feel like me’, and the first thing I thought about wasn’t, ‘I’ve been in an accident and I’ve lost my leg’, and I could go out wearing shorts and feel proud.

“For years, I would wear trousers and try and hide the fact I was an amputee,” Reid admits. “It wasn’t until I started running again that I no longer hated my artificial leg. Then it was: ‘This thing is awesome, you should stare at it, it’s amazing!’”

Let’s ask girls what they need

Sports provided a safe space for Reid to rediscover herself – but there were barriers to overcome, and she’s a fierce believer in our duty to do this for all girls.

“The fact we’re having so many girls drop out of sports and not experience the benefits is just unacceptable; we have this huge number of girls and women not realising their potential. We just can’t have that.”

The way “sports is set up” is a big part of the problem, she says, and we need to make it “more accessible, friendly and open for women and girls.” There are multiple factors to this picture, but Reid believes some of the barriers could actually be quite “simple” to solve, provided we’re willing. For example, if we want to understand what’s leading teenage girls to drop out of sports and what they need to feel better supported – “we just ask them,” she says.

“If it’s an issue that girls don’t like what they’re wearing, let them wear what they want – does it really matter? I’ve been in scenarios, sometimes the kit you’re provided with, it’s really tiny. If I’m on my period, sometimes I really don’t feel like wearing a pair of bikini shorts. Let’s just ask the girls: what do you want to do, what do you enjoy? At the end of the day, this is about making sport something that brings joy and confidence and fun.”

Always’ research found nearly 75% of girls feel they require more support to keep them involved in sport. Reid says she was lucky to have had very supportive coaches and “people in my court” that made all the difference.

“I remember my very first athletics meet. I was taken to it by two retired gentlemen who ran an amazing amputee sports organisation; they came to my house and picked me up and were by my side the whole time… At the time, I didn’t think that much about it. But now I think, what a gift they gave, with their time and encouragement, and that transformed my life.”

Reid reflects. “We need more of that for our young women.”