The RSPCA have launched  their #ForPupsSake campaign today calling on the UK Government to change the law to stop puppy imports and crackdown on dogs being sold illegally on the black market.

The demand for puppies has soared in the UK during the pandemic and this increased demand may be inadvertently fuelling the puppy trade both here and abroad, as shocking new polling revealed that 38% of UK adults considering getting a dog in the next six months would buy one that had been smuggled into the country from abroad.

Sadly, this trade has a tragic toll on young dogs and their mothers and, in recent weeks, the RSPCA have taken in a litter of sick puppies from a puppy farm as well as rescuing a suspected breeding bitch who was dumped dying in freezing conditions as she was no longer useful for producing pups.

We need tougher regulations around the importation of puppies 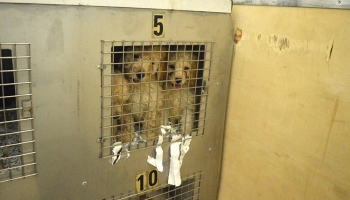 Today, with the launch of #ForPupsSake, the RSPCA are urging the UK Government to increase the minimum age that puppies can be brought into the UK from 15 weeks to 24 weeks as well as introducing better enforcement checks at the borders.

RSPCA dog welfare expert Dr Samantha Gaines said: “We have huge concerns about puppy imports and with the reported soaring demand for dogs as people stayed at home through the pandemic, we fear this demand is fuelling this potentially damaging trade. This summer saw legal imports of puppies more than double as the demand for puppies can’t be met domestically.

“New laws introduced in April this year should help crack down on the domestic puppy farms in England and Wales, but dogs are still coming in by their thousands from overseas and we have no independent way of checking the conditions in which these puppies are being kept.

“We fear that legal imports are often a cover for puppy farms which don’t put the welfare of the animals first and Brexit provides us with a unique opportunity to finally crackdown on this problem.”

“We’re calling on the Government to change the law to increase the age that puppies can be imported from 15 to 24 weeks. This will not only better protect their welfare, and it reduces the value of the puppy to dealers, making it less lucrative and will also make it easier to spot puppy smugglers if they’re attempting to bring in younger dogs illegally.”

The trafficking of puppies is big business in the UK and RSPCA investigations have uncovered gangs of sellers making millions of pounds by breeding their own dogs in poor conditions as well as importing puppies from overseas.

Dr Gaines continued: “Puppies who have been smuggled into the country can often have serious health problems and develop long-term behavioural issues. Unfortunately, these pups will often have been bred in disgusting conditions on puppy farms overseas before being taken from their mum when they’re just a few weeks old meaning many miss out on important social interactions and lessons from their mum, which can cause life-long behavioural problems once they’re rehomed.

“Dogs will be loaded onto vans and transported for long distances to their final destination. Many puppies from different litters and locations are mixed together on these vans which are the perfect breeding ground for serious infections, viruses and diseases that can be fatal to weak and vulnerable youngsters.

“Most dogs won’t have access to proper veterinary care or appropriate vaccinations prior to travelling and this means that a lot of dogs who are being imported illegally could be bringing extremely dangerous diseases into the UK, such as zoonotic diseases (that can be passed onto humans) or rabies, which is not active here but is present in some countries overseas.”

Dogs in this trade often have serious medical issues 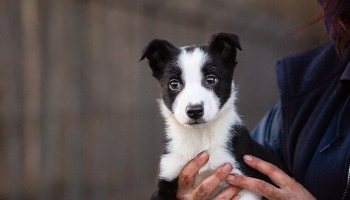 By calling for this change in the law, the RSPCA are trying to better protect puppies like Amos, Clarence, Edison and Edmond. The nine-week-old collie pups are currently being cared for by staff at one of their animal centres after coming into their care following an investigation into the puppy trade. The pups are suffering from medical issues and are nervous following their poor start in life.

The RSPCA say the pups were all extremely timid when they arrived and their staff have been working really hard to build up their confidence and, thankfully, they’re making great progress. They’re also receiving veterinary treatment for stomach problems, which isn’t unusual for puppies who have been rescued from these sorts of environments as they can often be carrying parasites or infection.

The RSPCA say they also have serious welfare concerns about the dogs who are used for repeated breeding, with little concern for their welfare and with many being dumped when they’re no longer useful. Dogs like Vicky, a two-year-old French bulldog who was found dying, having been abandoned in a park on Monday. She was freezing cold, collapsed, emaciated, had severe untreated eye, ear and skin conditions. Her coat was stained with urine and she had overgrown nails so it’s believed she’d been kept in an enclosed space, outside, and had been used for breeding as she had a C-section scar.

RSPCA inspectors believe she may have been abandoned by her owners because they didn’t want to spend any money to seek veterinary attention for her health problems and because she couldn’t be used for breeding in this state and was “worthless” to them. Sadly, vets felt she was so poorly that the kindest option was to put her to sleep.

A recent survey found 9% of UK adults had got a new dog since the start of lockdown, in March, and worryingly, despite the serious welfare issues and public health concerns, a further 23% are interested in buying a new puppy in the next six months. Among those, 38% admitted that they would buy a dog that had been smuggled from outside the UK.

The RSPCA want to end the illegal selling of kittens and puppies in the UK by 2030, as part of their new strategy, which is launching in the New Year.

As well as calling for the UK Government to crackdown on the illegal imports of puppies, they’re also encouraging prospective buyers to get their pet safely and, where possible, to adopt instead of shop.

The RSPCA are urging all buyers to use The Puppy Contract – a free online tool that offers a step-by-step guide on how to buy a happy, healthy puppy – and they’re supporting the UK Government’s Petfished campaign to ensure families think about who is behind the pet.

Support the RSPCA’s #ForPupsSake campaign and sign their letter to the Secretary of State urging him to increase the minimum age that puppies can come into the country.

House prices set for continued growth across the country