The RSPCA has rescued animals large and small this year, with creatures turning up in unexpected and very silly situations.

The animal welfare charity has compiled its 20 “best rescues” of 2020, including a squirrel discovered behind a fridge, and an unfortunate fox found with its head stuck in a watering can.

A spokeswoman for the RSPCA said the charity hoped the fun animal rescues would provide some cheer “after this challenging year”. 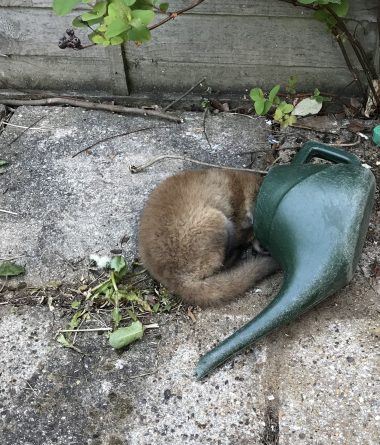 – A fox with a watering can stuck on its head

Rescuers were called in April to help a fox cub.

Officer Lynn White said: “This poor fox had probably got stuck while he was trying to get some water out of the can. He was very exhausted from trying to remove it himself.

“I wasn’t sure how best to get him out – but then I remembered I had some Vaseline in my van and so I used that on his neck and then I was able to slide him out of the can.”

– A deer trapped in a gate

An RSPCA officer used washing up liquid to rescue a muntjac deer trapped in a metal gate in Sutton Coldfield in February.

Catherine Strawford poured washing up liquid over the deer and set him free into the wild.

– A hedgehog caught in a gap in a tree

A hedgehog was chiselled out of a tiny gap where it had got stuck between a tree and a concrete pillar in Blackpool.

RSPCA inspector Will Lamping was called to the garden in July, saying: “He was on his side so he’d clearly tried to push through the tiny gap and got stuck fast.” 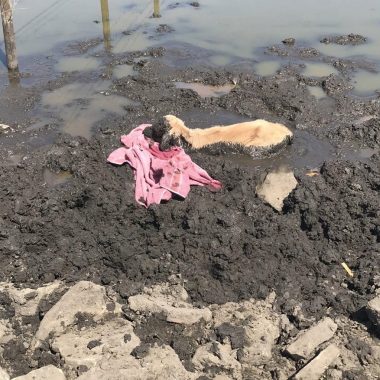 – A newborn calf stuck in mud

A calf wandered into a boggy pond that had dried up in May, and began to sink into the mud.

Inspector Ryan King was called to Rochdale after a tram driver spotted the calf.

He said: “I managed to get a towel under his nose to keep his head above the mud and water and make sure he could breathe while I set about freeing him.”

– A lamb who fell through a broken manhole

Rescuers from the RSPCA, fire service and local farmers in Durham saved a lamb who had fallen down a broken manhole in May.

RSPCA officer Emily Welch said: “The farmer noticed the lamb’s mum stood at the top of the hole looking lost and he couldn’t spot her baby.

“When he went to investigate he heard the little lamb bleating from down the drain.” 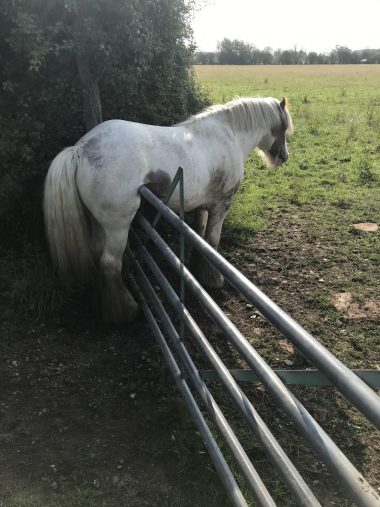 A walker in Leicestershire spotted a horse with the front of his body on one side of a gate and his back legs on the other.

RSPCA rescuer Jack Curran was called to the paddock in June, tracking down the pony’s owner and together helping him over the gate.

– A squirrel stuck at the back of a fridge

When a man heard scrabbling in his kitchen in September he found a squirrel stuck in the back of his fridge.

Inspector Emily Buckett was called to the house in Wimbledon, south-west London, to help the rodent.

She said: “We moved the fridge outside and unscrewed the back. The squirrel was bright and uninjured, as soon as we removed the back he popped out and dashed off, very pleased to be free.”

– A cockapoo puppy wedged under a reclining chair

The eight-week-old puppy, nicknamed Pudding by his rescuers, was saved in October.

Hampshire Fire and Rescue Service rescued Pudding unharmed at the home in Portsmouth after his fur got caught in the mechanism of the chair. 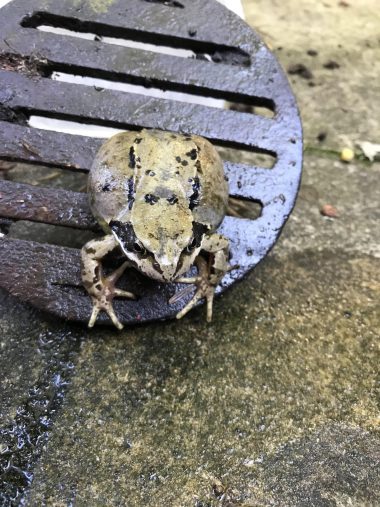 – A frog stuck in a drain

A frog needed help from the RSPCA and firefighters after getting stuck in a drain cover in Merseyside in September.

RSPCA inspector Leanne Cragg said: “When I arrived, his whole body was wedged tight with his back legs stuck in the drain.

“I’ve heard of toad in the hole – but this is my first frog in a drain!”

– A fox with its head stuck in a wheelchair lift

A fox was released into the wild after he was discovered with his head stuck in Oxford in September.

RSPCA Inspector Andy Eddy “The poor fox was distressed and exhausted from struggling to escape with no success.

“I think he must have tried to jump up through a glass plate to the top level and bounced back and had fallen with his head down the edge of the side rail.” 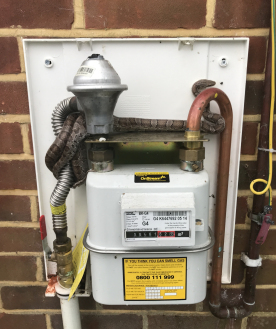 – An unexpected visitor in a residential meter box

A gas meter reader found a snake wrapped around the pipes in a meter box in Hampshire.

The worker contacted the RSPCA, which believes the corn snake was an escaped pet.

– A rat stuck inside a car wheel

An RSPCA rescuer was called to Gateshead in July.

Inspector Jaqui Miller said: “Luckily she wasn’t injured so I was able to free her there and then, and she scurried back off to safety.”

– An owl stuck inside a fireplace

A tawny owl needed help after getting stuck inside a fireplace in Oxfordshire in April.

Inspector Lauren Bailey said: “The family had been hearing noises from the chimney and fireplace for a few days but had no idea there was a bird trapped inside until he fell all the way to the bottom.

“The first they realised was when they saw him peering out through the fireguard – he had his feet up against the grille like he was waving and asking for help!” 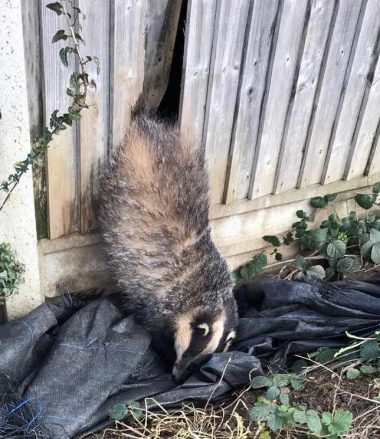 – A badger with its bottom wedged in a garden fence

A concerned homeowner called the RSPCA for help in November.

Chief Inspector Mark Miles said: “This poor badger was completely jammed in that fence and going nowhere. It looks as if he was trying to get from one garden to the next via the hole in the fence, but had misjudged the width of his backside.”

– A “greedy” sheep stuck in its feeder

Rescuer Emily Welch, who was called to a field in Richmond in February, said: “I suspect she was being a little greedy and pushed through the rest of the flock to get to the tasty hay and got herself trapped.

“She was trying to move forwards out of the railings but her back end was too wide so I climbed into the hay rack and managed to carefully push her out backwards.”

– An owl stuck between glass doors and a balcony

RSPCA inspector Gemma Fowler was called to a home in Bradford after the residents spotted the stuck bird.

The owl was uninjured, so Ms Fowler lifted it out of the gap and released it into the wild. 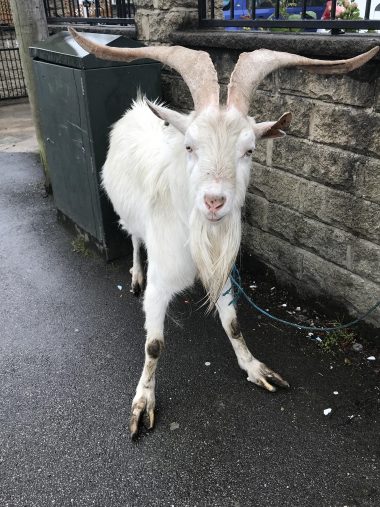 – A billy goat found at a bus stop

A lost goat was found at a bus stop in Bradford in June, after it was seen wandering through gardens.

Inspector Emily Stodart said: “It’s certainly not something you see every day.

“When we got there, we found he had been making his way through a few gardens before stopping at the bus stop.”

– A hedgehog stuck in a bird feeder

A greedy hedgehog ended up in a prickle after crawling inside a discarded bird feeder in search of food.

– A seal among the treadmills 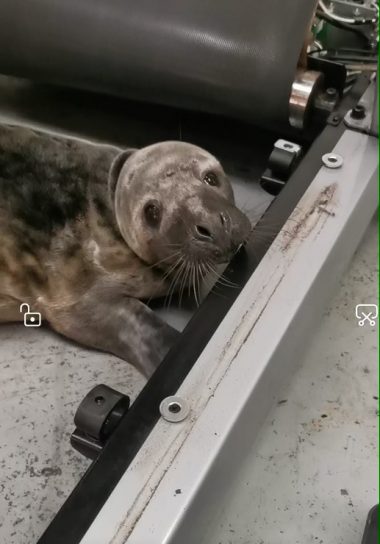 Workers at a gym equipment warehouse in Llanelli found a grey seal pup among the treadmills when they arrived at work in December.

Staff ushered it out and back into the river, where it was collected by an RSPCA inspector.

– A snake behind a tumble dryer

A couple found a 4ft snake after they went to fix their faulty tumble dryer.

RSPCA officer David Hatton went to collect the snake from the home in Merseyside, saying: “I’m not sure how he managed to get into the utility rooms but was probably attracted to the warmth of the dryer.”