Sharon Osbourne on why she may believe in UFOs a bit more, thanks to son Jack

Jack Osbourne tries to convince his famous parents, Sharon and Ozzy, that supernormal activity is real in The Osbournes Want To Believe. 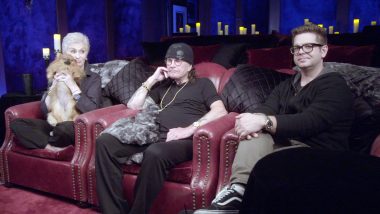 Sharon, Jack and Ozzy Osbourne are discussing whether Bigfoot is reality or fiction.

Jack, son of musician Ozzy and Sharon, has just shown them footage he says is “considered some of the most authentic”, that shows what many have debated is or isn’t the folkloric creature shown on a grainy black and white screen moving across a landscape.

It is all part of their new Really TV series titled The Osbournes Want To Believe, which sees Jack trying to talk his famous parents around into considering that supernatural activity and more may hold some truth.

“We did it all during quarantine and it was like ‘Hey, do you want to do this thing? And they were like ‘Absolutely, we’ll do anything’. So it didn’t take too much convincing,” explains Jack.

The family is no stranger to appearing on TV together, having been one of the pioneers of reality TV with their MTV series The Osbournes back in 2002, which also featured daughter Kelly.

Black Sabbath frontman Ozzy, dubbed the Prince of Darkness throughout his stellar music career, is resolute when asked by Jack about if he believes in Bigfoot.

“No,” he says emphatically, during the first episode of the programme filmed during lockdown, which sees Jack show his parents video footage of poltergeists, haunted dolls, UFOs and more, followed by a discussion and sometimes debate, about the veracity of various phenomenon.

Does Jack think father Ozzy, who spoke frankly about being diagnosed with Parkinson’s disease earlier this year, is the most sceptical of them all?

He says: “Oh absolutely, he’s superstitious, but he’s a sceptic and a cynic when it comes to this kind of stuff”.

The unexplained aside, Sharon, 68, is also no stranger to TV screens in the US and has been a co-host on American chat show The Talk since 2010.

She also appeared on UK screens as a judge on The X Factor.

She and Brummie Ozzy, 71, first met in 1970, and married in 1982. They went on to have three children – Kelly, Jack and Aimee, who has largely chosen to stay out of the limelight.

When Sharon reflects on filming the series, she says it was a “gift”.

“Because we were all so bored and had you know, wanting to see each other, no work, no nothing, so it was like a gift… it was so much fun,” she explains.

So has son Jack, 34, managed to change her mind on anything?

Jack reckons it’s about “re-gearing” what you know.

“I think it takes a certain kind of, you have to almost re-gear your understanding of things to be totally openminded to everything,” he says.

“We’re all told from a young age ghosts aren’t real, aliens can’t exist, all this stuff, Bigfoot is not real, (the) Loch Ness Monster is fake, and so it’s almost like deprogramming that and hey, what if it is something but it might not be what we think it is, but it’s still something that we don’t know what it is”.

It’s something he’s been interested in from a young age, but refers to himself as an enthusiast, and not an expert, on the subject matter.

He explains: “I’ve always been into kind of paranormal, UFO stuff and it started as a kid when X Files was the biggest show ever and I just geeked out on it.

“It’s always been like my little kind of side interest and then I started doing Portals to Hell (a TV programme) in 2018 and it’s just kind of been this weird world I’ve found myself in.

“I’ve very much covered it from an enthusiast kind of approach instead of like the expert, because I think it’s odd to be an expert on something that isn’t really proven”.

Mother Sharon recalls his childhood interest in the area.

“It was something as he said from a child, especially living in America you’d go in a young boys bedroom and there’d be sporting team posters on the wall and things like that and Jack would have alien bodies on the wall posters, so it definitely has been with him a long time”.

As has their interest in these things as a family, you could say, as the series sees Sharon reference a family trip many years ago that saw them go looking for Scotland’s famous Loch Ness Monster, the mythical creature said to inhabit the loch on the Scottish Highlands.

“I think it was in 1996, and we went up to Inverness and we went on like a little random long weekend holiday and went on a little Loch Ness Monster excursion,” says Jack.

Sharon adds: “Jack and Ozzy would go out to the loch at night and they had their torches, going ankle deep into the loch, looking for the monster”.

“But no luck,” quips Jack, “we never found Nessie”.

Despite living in the US, the family still has strong roots in the UK, and still owns property here.

“We miss it terribly,” Sharon says.

“We still have our house there, the house we talk about (in the show), we still have it, it’s just that we haven’t been over for a while but we miss the UK terribly, really, really a lot.

“And since you can’t go you want to go more.

The family are among millions staying put due to coronavirus travel restrictions.

But luckily, after rigorous testing and putting strict safety measures in place, they were able to film the series, albeit with a minimal crew.

“We were super cautious and tested everyone a day or two before we started filming and just cranked it out,” says Jack.

“The biggest thing was trying to get our ducks in a row to make sure had some kind of system in place for filming during Covid, and we got four hours to do two episodes a day so let’s just roll and that’s exactly what we did and it was a lot of fun”.

The Osbournes Want To Believe airs on Really from October 19.