The Crown finally won the top drama prize on a night to remember for British talent at the 73rd Primetime Emmy Awards. 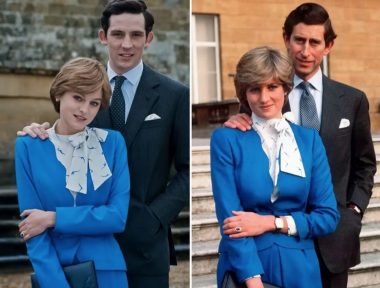 Olivia Colman delivered another memorable awards show acceptance speech, breaking down in tears over her late father after winning the lead drama actress prize for her final season playing the Queen.

Josh O’Connor won the outstanding drama actor award for his portrayal of the Prince of Wales and accepted the honour at the star-studded ceremony in downtown Los Angeles.

O’Connor, 31, paid tribute to Emma Corrin, describing the actress as a “force of nature” for her turn as Diana, Princess of Wales.

Corrin, 25, was nominated alongside Colman, 47.

The Crown’s supporting stars also won, with Gillian Anderson and Tobias Menzies being recognised for playing Margaret Thatcher and the Duke of Edinburgh respectively.

Accepting her prize, Colman, who will be replaced as the Queen in the forthcoming fifth season of The Crown by Imelda Staunton, said: “What a lovely end to the most extraordinary journey with this lovely family. I loved every second of it and I can’t wait to see what happens next.”

Colman, speaking from an event in London surrounded by many of her The Crown co-stars and its creative team, broke down while paying tribute to her late father.

“I wish my dad was here to see this,” the Oscar-winner said. “I lost my daddy during Covid and he would have loved all of this.”

As well as the top drama prize of the night – which was both a first for the series and for Netflix – The Crown also won for its writing and directing.

Kate Winslet triumphed in one of the most competitive categories – outstanding lead actress in a limited or anthology series or movie.

The decorated star was recognised for playing a vape-smoking small-town detective in Mare Of Easttown, one of the year’s most talked about dramas.

Accepting her prize, Winslet said the decade must be about “women having each other’s backs”.

She thanked Brad Ingelsby, Mare Of Easttown’s creator, for writing a lead character who is a “middle-aged, imperfect, flawed mother”, adding “you made us all feel validated”.

Winslet paid tribute to her three children and her husband Ned, “who I get to hold hands with for the rest of my life, yes! I am the winner!”

The final award of the night, outstanding limited or anthology series, went to Netflix’s chess drama The Queen’s Gambit.

It won ahead of I May Destroy You, Mare Of Easttown, The Underground Railroad and WandaVision.

In one of the night’s least surprising moments, the show’s star Jason Sudeikis won outstanding comedy actor for his portrayal of a folksy American football coach parachuted in to manage a struggling English Premier League club.

The British star, 47, was overjoyed upon taking to the stage and tearfully exclaimed, “Jesus Christ on a bike” as she clutched her first-ever Emmy statuette.

She paid tribute to co-star and fellow nominee Juno Temple, saying she wished she could share the prize with her.

The 41-year-old said starring in the show had been “one of the greatest honours” of his life.

Ted Lasso did not have the comedy categories all to itself, however.

The 70-year-old was recognised for playing a revered Las Vegas comedian.

Smart was given a standing ovation while taking to the stage and wiped away tears while paying tribute to her husband, the actor Richard Gilliland, who died in March.

Hacks also won for its writing and directing.

Michaela Coel can now add an Emmy in her trophy cabinet, after being recognised for her writing on I May Destroy You.

The show’s star and creator dedicated the series to “every single survivor of sexual assault”.

I May Destroy You, a drama which explores consent, was inspired by Coel’s own experiences of being assaulted.

The supporting stars of Mare Of Easttown – the gritty murder drama set in forgotten, small town America – won in the limited series category.

Actress, dancer and choreographer Debbie Allen was the recipient of this year’s governor’s award, the TV Academy’s lifetime achievement prize.

The 71-year-old was the first black woman to be honoured with the gong.

The main winners of the night were:

Outstanding writing for a drama series – Peter Morgan (The Crown)

Outstanding directing for a drama series – Jessica Hobbs (The Crown)