Who will be Christmas Number One? Elton and Ed take the lead as favourites - The Coventry Observer

Who will be Christmas Number One? Elton and Ed take the lead as favourites

There’s less than a month to go and Elton John and Ed Sheeran, now 4-5, have knocked YouTuber LadBaby off the top spot, to become favourites for this year’s Christmas Number One.

The chart-topping powerhouse duo have created three new Christmas songs, and, although their chosen single for the festive charts is yet to be released, Ed and Elton’s odds have been slashed from an even-money chance to 4-5 – now favourites to take the choral crown.

Despite having yet to enter the race, Nottinghamshire YouTuber LadBaby has been given an even-money chance to finish top of the tree. However LadBaby recently warned reporters to ‘never rule out a sausage roll at Christmas’, and if successful it would be a feat matched only by The Beatles, who have four Christmas Number Ones to their name.

The great festive tradition kicked off with Al Martino’s ballad Here in My Heart claiming the first ever Christmas Number One, which topped charts in 1952.

Bookmaker William Hill, which instituted the now traditional flutter on each year’s festive chart-topper, when taking bets on 1977’s No1, Mull of Kintyre, is facing a bumper year of entries to secure the coveted top spot.

Chart superstar Ed Sheeran has teamed up with friend, mentor and all-round music icon Sir Elton John, to create three new Christmas songs, the first of which will be released at the beginning of December, and is called Merry Christmas.

Apparently, Sir Elton ‘reached out’ on Christmas Day 2020 after discovering his Christmas song ‘Step Into Christmas’ had reached the top 10 for the first time ever.

Sheeran, 30, who recently released his fourth solo studio album =, has already revealed the accompanying music video for their Christmas contender will parody former number ones. William Hill continues to see money coming in for the pair and, as a result, have tightened their odds further to 4-5.

Star – Mark Hoyle – has become an unlikely hit, smashing the charts with his charity singles and earning three consecutive number ones in the process.

It remains to be seen whether a tight-lipped Boyle will be seen in his Santa hat, and wielding a sausage roll, this year, and whether he will launch an unprecedented bid for a fourth successive, charitable chart-topper this Christmas. William Hill currently has LadBaby at evens.

After the rip-roaring success of her fourth studio album, 30, and an emotional An Audience With, powerhouse songstress Adele currently has three songs on track for a number one spot – but will she be at the top of the good list for this year’s Christmas Number One? William Hill has given her a 10-1 chance of claiming the Christmas cracker.

Rising Indie band from Wigan, The Lathums, had chart success with the release of their debut album How Beautiful Life Can Be earlier this year. As their credentials continue to rise and more gigs are booked, can the four-piece band keep up the momentum and get their anti-festive tune Krampus to the top of the tree? William Hill has them at 16-1.

Comeback supergroup ABBA have entered the race for the first time this year with their single Little Things, which reflects the joy of Christmas morning. To many’s surprise, this is the Swedish group’s first ever festive song, as they have never officially recorded a Christmas song before. William Hill has priced them at 25-1 to first time festive luck.

After finally hitting the UK’s Christmas charts just last year, with banger All I Want for Christmas 26 years after its initial release, high-note hitting Mariah Carey is back on the cards this year for a potential number one spot. Known to some as The Christmas Queen, Carey usually has the festive season covered, and is 33-1 to storm this year’s festive charts.

And they keep on coming, with recently reunited boy band The Wanted setting their hearts on securing the top festive single at 50-1, rising star Lola Young, the voice of John Lewis’ cute Christmas curtain raiser, 66-1, and Gary Barlow and Sheridan Smith’s pending duet of How Christmas Is Supposed To Be available at 50-1.

The 70th Christmas Number One will be announced at 17:45 on Friday December 24. 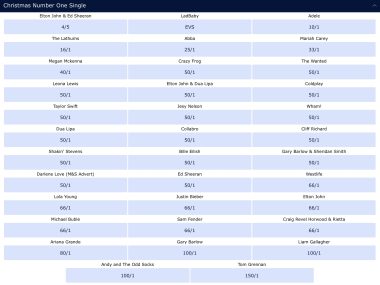 To view the Christmas Number One market, please visit: https://sports.williamhill.com/betting/en-gb/tv-specials/OB_EV21915074/uk-christmas-number-one-2021