THE BUSINESS Secretary Kwasi Kwarteng said there was a ‘compelling case’ to build the UK’s first Gigafactory at Coventry Airport, adding it would ‘make a huge amount of sense’.

He made the comments on a visit to the site and to show his support to West Midlands Mayor, Conservative Andy Street, who is looking to hold onto his seat on May 6. 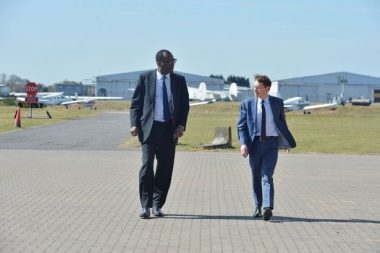 The business secretary said: “I was really impressed by what I saw at Coventry Airport, in terms of its scale, location and connectivity.

“Clearly, it represents a great opportunity.

“You’ve got a major automotive cluster of businesses such as JLR nearby, and the site is also well linked to serve a huge supply chain right across the region, from the Black Country to Birmingham.

“And, of course, it’s near the Battery Industrialisation Centre in Coventry, which is developing battery technology.”

He added Mr Street had campaigned for the UK’s first Gigafactory to be built in the West Midlands for the past two years.

The airport was identified in February as the potential site of the 4.5million square foot Gigafactory, which would manufacture batteries for electric cars.

Mr Street is in talks with the Government about securing a share of £500m to help make the plan a reality.

The aim is to attract a global car battery manufacturer to the site. Planning permission will be sought later this year, with the hope that the factory could be up and running by 2025.

The project is a joint venture between Coventry City Council and The Rigby Group, owners of Coventry Airport, and is backed by the Mayor, the West Midlands Combined Authority and councils around the region.

Mr Street said: “This Gigafactory is seen as absolutely crucial to industry in the region, so it was good to be able to show the Business Secretary exactly what a powerful case we have built here in the West Midlands.

“He was very impressed with the location and with the unified approach across the region.

“Although it’s happening in Coventry, this has the support of the Combined Authority including councils such as those in Birmingham, Solihull and the Black Country. It’s seen very much as a regional facility.”

He added he was talking to Government all the time about why the Coventry site should be the location of the UK’s first Gigafactory, explaining as the city and West Midlands was at the centre of the nation’s automotive industry it is the only sensible place to manufacture the batteries for the next generation of electric vehicles.

“There are 46,000 jobs in the automotive supply chain in the West Midlands, and many more in the tiers below that, such as in the metal industry.”

Mr Street has made winning a gigafactory one of the key planks of his manifesto for the upcoming election, saying it is key to the future of manufacturing across the West Midlands.

As carmakers move to manufacturing electric vehicles, they are expected to move production to areas close to car battery factories, which represent 40 per cent of the value of a vehicle.

Coventry-based Jaguar Land Rover has recently announced that it intends to become an ‘all-electric’ brand.

Winning the Gigafactory for the region will be alone worth an estimated 4,000 new green jobs as well as supporting the region’s existing automotive jobs.

Mr Street added: “The Government has recognised how important this area is to the future of car making, by investing £108million in a state-of-the-art Battery Industrialisation Centre in Coventry.

“Now we need ministers to join the team and take the next natural step – and put aside money for the Gigafactory here. This visit was an important step in that process.”

The West Midlands Mayoral election takes place on May 6.