COVENTRY has marked 75 years of town twinning with the Russian city of Volgograd, dedicating a memorial near Broadgate.

The Volgograd Memorial was unveiled in its new home outside Holy Trinity Church, after it was moved from Volgograd Place near Swanswell.

It was rededicated to honour the 75th anniversary of the twinning between Coventry and Volgograd – formerly known as Stalingrad.

The link was first made when almost 900 women from Coventry embroidered a tablecloth with their names and sent it to women in the Russian city with a message of hope and friendship as the Battle of Stalingrad raged.

The people of Coventry had suffered through the Blitz and air raids of the Second World War and had already started to reach out in peace.

That first contact led to a formal twinning in 1944 that now enables civic, trade and faith links, as well as school and cultural exchanges. 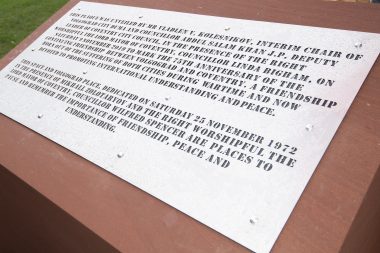 The memorial to Volgograd.

At the ceremony, Lord Mayor Coun Linda Bigham said: “We are very proud to rededicate the memorial in the heart of our city. It is a beautiful new addition to a beautiful part of our city, but it is far more than that.

“The memorial will remind us every day of the suffering caused by war and it will remind people of the friendship between our two cities, how we must continue to work to create a more peaceful, understanding world and what is possible when we reach out in friendship.”

Speaking to the crowd, Ivan Volodin, chargé d’affaires of the Russian Embassy, said: “The Volgograd-Coventry relations take a very special place among the many twinning projects of Russian cities.

“The shared memory of the Second World War runs deep into the very foundations of today’s Russian identity.

“Yet this relationship is also a forward-looking one, allowing the two modern cities to sustain wide cultural exchanges, or else to share best practices of urban development.

“Friends, you know that the current political relations between Russian and the United Kingdom are not ideal. Yet business ties, cultural relations and people-to-people contacts continue as normal.

“The projects like yours are an important part of the fabric of relations between our two nations. Without taking much more of your time, let me assure you that you may rely on the continued full support of the Russian Government for the twin cities programme.

“We understand that the British Government shares this approach and we appreciate it.

“With this in my mind, let me join my colleagues in congratulating Coventry upon the new Volgograd Memorial and wish you all the best.”

The event was part of a double celebration as the city of Volgograd was also presented with the Coventry Award of Merit on Saturday.

It is the highest honour the city can bestow and it is the first time it has been presented to a city.

Elsewhere in the city, a memorial to the Czech town of Lidice stands near Queen Victoria Road.