ON MONDAY the World’s first ever fully-functional electric airport opened in Coventry.

And The Observer’s Ryan Smith was given a behind the scenes look.

The long-awaited and much-anticipated ‘Air One’, created by Urban Air Port, looked unbelievably futuristic – more like a set from a sci-fi movie, rather than something that arrived in Cov this week. 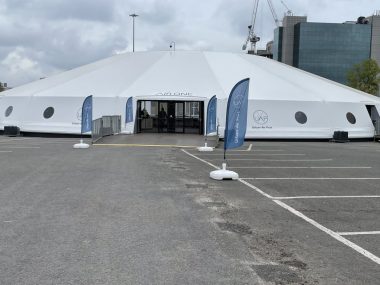 It runs on Hydrogen Fuel with charging stations for all of the electric vehicles inside and is expected to decarbonise transport while reducing congestion and air pollution.

Air One is operated through a Command Control area and currently has permission to occupy nearby air space during this demonstration period.

Urban Air Port’s Chief Technical Officer Alan Jones said in the future it would be looking to be able to fly wherever it needed to.

“We have the flight corridors on a unified traffic management map on a screen in the command area.

“The drones have to fly below 400ft and will be able to run for as long as the battery life allows them to.

“With some of the designs we have we can operate up to 180 aircraft-a-day through this airport.” 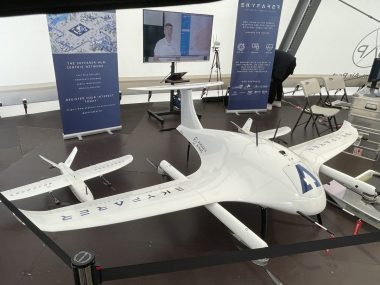 One of the centrepieces was the enormous S-A1 concept vehicle which would each be able to seat four passengers and could fly to Oxford in around 20 to 30 minutes – plans to extend trips to London are planned for the near future.

It does not come cheap however – once operational, a return to Oxford is estimated to cost £284-per-person (a rail return is around £25 and takes 48 minutes), although if demand increases and more journeys take place, it could become cheaper.

Alan Jones added: “The future ultimate goal is to have urban air ports across the country so we can travel between inner city environments without having to stop.

“We could hold up to three aircraft in hangars in this one Airport which means in the future we could operate multiple trips in one day.”

During the airport’s opening tours, which run between now and May 15, spectators will see live drone take-off demonstrations from Malloy, Skyfarer and West Midlands Police. 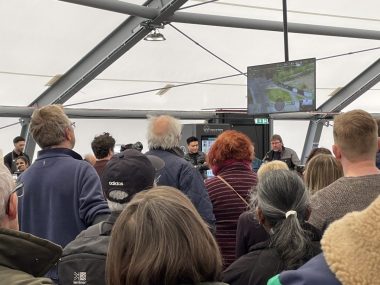 The police’s demo showcases drones vehicle tracking and their thermal imaging camera capabilities. Each police flight requires a pilot and an observer for each operation.

He added Air One could be used for sending out drones for pre-planned operations such as monitoring sports matches, protests and festivals in the future.

The Disaster Emergency Medical Security (DEMS) project, in collaboration with Coventry University, would enable drones to take off at airports such as Air One to deliver emergency supplies to people hit by natural disasters or suffering as a result of wars. 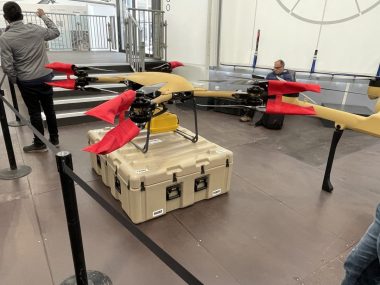 A drone by Malloy.

A disaster relief centre similar to Air One could be set up on the ground of the affected area very quickly, and since these ports do not operate on the power grid they would be able to function in the event of a major power cut.

Air One’s display also contains two conceptual ideas for how this technology could be applied to other areas in life.

‘City Box’ could see drones fly small packages in what would be the next phase of the traditional postal service.

Once the drones had delivered packages to the post office, a locker based system could see people pick up their post.

In the second concept ‘Drops Box’, Urban Air Port would work with traditional logistics companies to provide drones and launch equipment at warehouses to create a more cost-effective and environmentally-friendly method of delivering packages.

Tickets to see Air One are free.