IN THE early hours of a June morning in 2004, Tracey McAtamney took a phone call that was to change her and her children’s lives forever.

It was the worst news imaginable for the mum-of-two from Balsall Common, who is now launching a series of seminars and Memory Boxes as part of a foundation she founded 15 years later.

Her husband Tony, who ran a well-known Coventry firm of solicitors in Boor Hill, had left for his regular Law Society golf trip to Spain just days earlier, had suddenly died.

“We would normally go as a family but this particular year my older son, Anthony who was 15, was just taking his last GCSE exam so I made the decision to stay at home with the boys,” recalled Tracey.

“He had spoken to me on the Sunday night and I always remember, he said ‘I wish you were here.’ He spoke to the boys and finished the call to me with ‘I love you.’

“Oliver, who was just seven at the time, wanted to sleep in my bed because his daddy was away. At 1am my mobile rang and I grabbed it and just had this feeling. I stumbled into the bathroom and answered the phone and there was just one word – he just said my name. There was a silence and I just said: ‘he’s dead isn’t he?’

“When he said ‘yes’ I just collapsed in a heap on the floor. I remember sliding down the bathroom door and saying ‘OK, I can’t talk now because Oliver is in the bedroom. I’m going to have to call you back.’ It felt like someone had punched me in the chest. I crawled out of the bedroom because I didn’t want Oliver to see me, I just couldn’t face him.

“I opened Anthony’s bedroom door, where he was still awake with his friend, and just blurted it out. Anthony just looked at me, we hugged and the tears came down.”

Tony was discovered on the floor of his hotel room after suffering what turned out to be an abdominal aneurism.

It came as a huge shock as news spread to friends and colleagues of this well-known and respected lawyer who had been running his own practice in Coventry for 20 years. 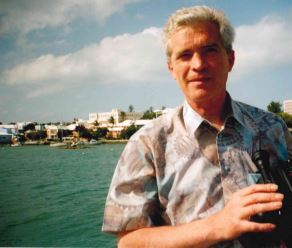 He was also well known for charitable work and was a trustee and secretary of the St Bernadette’s Trust which organised trips to Lourdes for youngsters and raised money to help those unable to pay.

Tracey, 54, said: “People are not meant to die on holiday. They are meant to come home. I had lost my husband, father of my children, our livelihood and most of all, my best friend. How do you tell a seven-year-old that his daddy is never coming home? To this day, this is the worst thing I have ever had to do.”

It was some 15 years later, in 2019, that this tragic event was to inspire a series of new ventures aimed at helping others overcome loss, and a foundation called Surviving Bereavement was born.

Tracey explained: “I started to go to a networking group Ladies First which was being run by a couple of ladies I knew and, only a month later, I was offered the chance to take over the group. We each shared our personal stories.

“This is the first time I had publicly talked about my loss and dealing with grief and resilience. It was following this I realised how many people were touched by my story and I was invited to be ‘A Women of Spirit’ in 2019 as well as publishing my own book, Hidden Strength.

“When I was asked to write my story I was surprised, but decided, if my experiences could help others, it would be worth it.

“Once my book was released a lot of people started getting in touch for advice and that’s when I decided to establish Surviving Bereavement, to raise money to fund my Memory Box/Memory Bag Campaign.”

“I had closed all these emotional boxes 15 years ago and once I had the time to open them, I realised that I had a lot to share.”

Surviving Bereavement exists to offer legal and financial advice as well as practical help, all the things, says Tracey, that were not to hand when she needed them.

She said: “Our aim is to raise awareness of not just the emotional aspect of grief, but also the practical and the mental wellbeing required to survive bereavement.

“After someone dies you find yourself surrounded by paperwork. I realised quickly that people needed help.”

This support also takes the form of seminars, a new series of which are now being planned remotely after lockdown brought an abrupt end to face to face gatherings.

A host of speakers are lined up to talk about their own personal experience with bereavement from this month, including topics on How to Support a Bereaved Young Person; How to Decide Style of Funeral Service and Coping With Baby Loss, attended by Sharon Luca-Chatha who founded The Luca Foundation following the stillbirth of her son Luca.

Efforts to find innovative new ways to keep the support going through the pandemic has coincided with a need for service being brought into even sharper focus.

She said: “At the moment there is an awful lot of pain because people are not able to see loved ones when they die and I relate to that because there was a lot of anger and regret that I couldn’t be there for Tony.

“We were only just getting the foundation on its feet when lockdown struck. It’s been very hard not to be able to meet up face to face. I really believe that talking is the best thing and really does help – but not being able to give out hugs at the moment is hard.

“I think these meetings are going to be needed after this pandemic more than ever.”

The latest initiative to come out of the foundation is her new Memory Boxes, created in Tony’s memory and personally hand-delivered by Tracey herself.

The bespoke boxes, which are available for children and young adults, typically contain items such as forget-me-not seeds, a personalised book and letter and age-relevant treat item.

“I thought memory boxes were really important to offer some comfort, but when I looked into it there was nowhere that actually gave them away for free, so I thought I would set it up myself,” said Tracey.

“I do cherish the importance of memories. You can lose people but you can’t lose memories. They are always there and we should treasure them as much as we can.

“I’m hoping to be able to put the boxes into hospices but I haven’t been able to do that yet because everything closed down.”

One of Tracey’s own cherished keepsakes following Tony’s death, is actually a golf ball.

“When I went to Spain to repatriate Tony’s body, I visited his hotel room and the weirdest thing happened – a golf ball rolled out from under the bed. It was like some sort of message. That’s Tony telling us that he’s OK, I thought. That turned out to be a sort of turning point for me.”

It was to be 12 years later when Tracey had to come to terms with her loss that her her mum died following a two-year battle with ovarian cancer.

And she was no stranger to grief even at an early age, after losing her father in an accident when she was just seven – the same age as her youngest son Oliver had since lost his father.

It is hoped Surviving Bereavement will continue to grow and help navigate more people through their journey with grief which, Tracey promises, does become easier.

“You go through pain, anger and sadness but you do get through the other side and you smile again. It’s about survival more than anything else. But you do survive. That is why I wanted to do this, to show that to people.

“The pain changes and you never stop missing somebody that’s lost from your life. But memories must always be treasured and talked about. They mustn’t be the elephant in the room.

“I developed a coping mechanism which I never knew existed. I had no choice, my boys were now my priority and I would protect them with my life. We would survive.”

Now settled with a new partner of 10 years – and spending as much time as she can keeping up with her sons, now aged 32 and 23, three step-children, Helen, Victoria and Gerard, and four step-grandchildren, aged between 4-16, Tracey knows Tony’s memory is never far away.

“I think he would be so proud of his whole family. When I go to see them I always get upset because it brings home what he’s missing out on.

She added: “Over the last 15 years, I have had to rely on that inner strength to get me and the boys through situations that have seemed impossible. Death has not defined us as a family, however it has truly shaped us as people.

“My motto – there is always a light at the end of a tunnel and always an answer to that impossible situation – and that’s what Surviving Bereavement is here to help with too.”