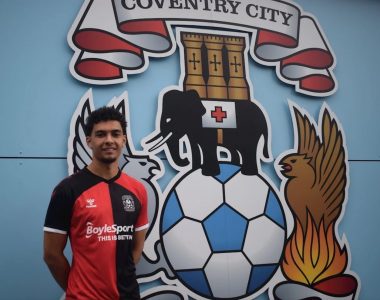 The 23-year-old scored 26 goals for League Two Mansfield in 2018-19 and 16 for League One Lincoln last season during loan spells from the City Ground and has now made a permanent move for an undisclosed fee.

“He is a terrific talent, who we have been interested in for the last couple of years.

“As his goalscoring record shows, he’s a striker with great ability who really tests and stretches defences and is a fantastic signing.”

The 23-year-old put pen-to-paper on a deal with the Sky Blues and said he is ‘buzzing’ to start working with his new team mates ahead of the new campaign.

Tyler said: “I’m buzzing to get everything done and get it over the line finally and hopefully now we can look forward to the season and get going.

“I think this is the next step in my career, I’m buzzing like I said to be at Coventry and in the Championship and that is the next step for me and hopefully it will be a good move for both of us.

“I played against Coventry last season and they played some really good football and I’m looking forward to being part of that.

“I’m a striker and I want a minimum of 20 goals and as a team we want to finish as high as we can and hopefully we can do that.”