Amazing Coventry swimmers take on the channel for charity

Eitan Darmon, captain Joe Deavall, Hayden North, and Brian McSharry are all accomplished club swimmers and have been training hard for the relay-style swim.

The boys have set a £15,000 target and have so far received over 370 donations on their JustGiving page. 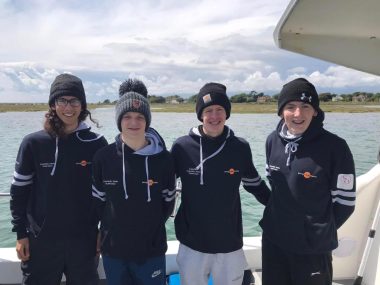 The team, with an average age of just 16, completed the 21-mile journey in just 10 hours and 17 minutes – the second-fastest four-person channel swim team since 2016 and smashing their initial 12-hour target.

The four boys set off on Monday and their progress was tracked on YMM’s social media page where people could also track their boat, ‘The Sea Leopard’ on the Channel Swimming Association website.

The swim was overseen by a Channel Swimming Association officer to ensure the boys followed all the regulations.

They trained in open water to acclimatise themselves and Channel Swimming Association rules meant they had to complete the challenge without wetsuits.

They all train in the pool five to six times a week and compete in galas for their swimming clubs.

Brian, 18 said: “I have always wanted to swim the English channel and YMM is such a worthy course.

“As we all know mental health is a growing issue and the money raised will be used to support the teenagers who need it.”

The money will help fund YMM’s mentoring service which has gone from strength to strength and now provides support to six secondary schools.

The 1:1 mentoring sessions are free for 11 to 18-year-olds, with most students holding a weekly session where they have a safe space they can share anxieties or concerns. 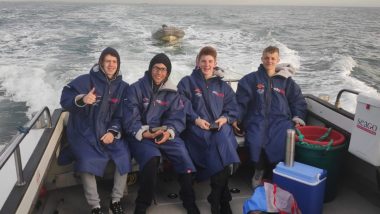 The charity aims to increase self-esteem and confidence in students through mentoring, resulting in young people feeling more relaxed and focused.

Founder Sue Roberts added: “I’ve been planning this channel swim for around three years but Covid prevented us from doing this earlier.

“I feel so proud of these four teenagers who have given up so much of their free time in the last year to train for this challenge – on top of GCSE and AS level exams, driving lessons, part-time jobs and much more.

“Their focus and commitment has been amazing and they genuinely care about being able to support their peers and any other young person who is struggling with their mental health.”

Visit justgiving.com/fundraising/ymmchannelswim to donate to the swimmers’ cause.