A COVENTRY Blitz survivor and the only woman appointed as a Civil Defence Fire Guard instructor in the city during the Second World War has celebrated her 99th birthday.

Mary Lock was just 17 when her family home in Three Spires Avenue, Coundon, was destroyed in the German bombing raids on November 14 1940.

Although Mary’s family survived the blast, ten of their friends and neighbours in the street perished during the Blitz.

Her mum also died shortly after due to the stress meaning Mary and her two younger sisters were left homeless and taken in by an aunt in Keresley. 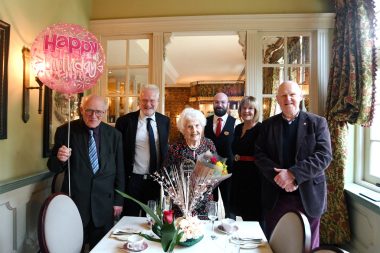 Mary went to take up her Civil Defence role and then, after the war, Mary and her late husband Clive, a teacher, settled in Rugby.

As one of the oldest surviving members of the Civil Defence Association in the UK Mary was invited to attend the 75th anniversary of the Battle of Britain at St Paul’s Cathedral, London, in 2015 and was delighted to meet Prince Edward on another occasion.

Mary celebrated her 99th birthday in the Garden Room restaurant at the historic Coombe Abbey Hotel.

The Warwickshire hotel has long been a favourite with the family and Mary celebrated her 95th birthday there.

The venue’s operations director Ron Terry said: “We are absolutely thrilled to be hosting Mary and her family for her 99th birthday afternoon tea celebration.

“She has lived an amazing life through tumultuous times and we hope to be hosting her 100th in a year’s time.”

The hotel’s on-site florist shop, Flowers at Coombe, which opened on February 15 and is run by Candice McCann, made Mary a special floral birthday bouquet.

Mary’s daughter Jennifer Balfe, a retired nurse who lives in Tile Hill, said: “Mum is completely switched on and the matriarch of the family.

“She wanted to celebrate her 99th birthday this year – just in case she doesn’t make it to 100.

“She’s fit and healthy and an avid gardener – her garden is her salvation and paradise.”

Mary continues to work diligently as a volunteer, raising funds for the Friends of St Cross charity and was still serving tea at Rugby’s Hospital of St Cross until a few years ago.