Following back to back victories against Ipswich and Poole, Coventry travelled to Wolverhampton in strong spirits – though were without star Aussie racer Bobby McMillan who has returned to his homeland.

Coventry suffered an early blow when Ben Higham was excluded from heat one after moving at the tapes – Angell convincingly won the re-run.

Polish star Michal Sassek, who flew in from Poland on Saturday night, won heat four – though Wednesfield signalled their intent with two early heat advantages as they opened an eight point lead after four heats.

Determined not to give in, Coventry hit back with a 7-3 of their own in heat seven when Sassek teamed up with Jake Read who superbly held Chris Jewkes and Brandon Whetton to bring Coventry within a point of the hosts. 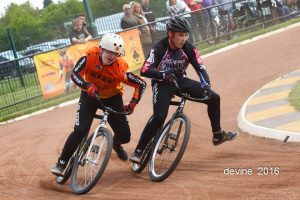 Star home riders Ben Mould and Paul Heard teamed up just before the break to earn themselves a five point lead after heat nine.

Four successive race advantages after the break then destroyed any hopes Coventry had as two 6-4s, a 6-3 and a hard to take 7-0 increased Wednesfield’s advantage to 19 points.

Despite a 7-2 in heat 14, Sassek again with the win, the Godiva club failed to make any realistic impact on Wednesfield’s lead – though shared the concluding four heats with heat wins for Myke Grimes and Chris Parish.

Post game, Coventry team manager Lee Marsh said: “That was a tough match and we knew coming to Wednesfield was going to be hard.

“There were moments of hope but their strength showed and the Wednesfield lads were the better team this afternoon.

“I thought Michal rode fantastically well once again and Andy (Angell) held his cool after an unfortunate exclusion to pick up three heat wins.”

Coventry’s next Elite League fixture comes on Sunday (June 12) at Hearsall Common when they take on Horspath with a bumper crowd expected.