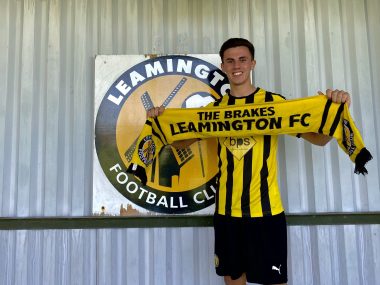 The promising 21-year-old is in pursuit of regular first-team football, and believes his best chance of finding that to be with Paul Holleran’s Brakes after leaving National League County.

Osborne has a grounding in the non-league game having impressed at Midland League side Dunkirk, prior to his move to then-League Two Notts in 2016.

It was during his two-year scholarship with the club that he was named Academy Player of the Year in the 2016/17 season, an accolade that later helped him accrue 28 first-team appearances, three goals and the prestigious Young Player of the Year award for the previous two seasons.

And the new Brakes man admits it was a conversation with another former Leamington forward in Colby Bishop that convinced him to head to Warwickshire.

“I spoke to Paul quite a while back now, initially for a bit of advice mainly, but Colby couldn’t recommend him highly enough, especially coming from a full time club to a club like Leamington – it’s just full of opportunities,” said Osborne.

“I’m very eager to get going – it’s been a while now obviously with lockdown, not playing, so I just want to get on the pitch and do what I do really – I’m looking forward to getting regular games.”

As for Holleran, his delight at securing the attacking midfielder could not be more clear.

“Sam is a player that came on the radar during the summer,” he revealed.

“He’d been at Notts County for four years, and is a player that was recommended to us by Colby. We had some initial chats; I probably thought that he was going to take one of the other options he had.

“But I think he sees Leamington as an environment that he’ll enjoy and could thrive in. I think he’s seen what’s happened to some of the other young players at the football club, and has chosen to come and join us so we’re delighted to get him on board.”

In terms of what makes Osborne such an attractive proposition for Leamington going forward, the Brakes boss says that the new arrival fits the mould of what the club are building for the forthcoming season.

“I think people will enjoy his directness; he makes things happen, he can go either way, and I think that with so many of the other young players we’ve signed this year I think he could be an exciting prospect,” said Holleran.

“He got involved straight away in his brief appearance against Solihull Moors last Saturday when his challenge to win the ball led to our goal.

“You could see what he will bring to us, and along with some of the other young lads like Danny Waldron and Dan Meredith, gives us lots of energy, which is something, with the National League North looking as strong as it’s been for a few years now, that we are going to need in the forthcoming season.

“So I’m delighted to wrap this signing up. Sam has a fantastic attitude. I’ve actually enjoyed the last month of dealing with him and I’m looking forward to working with him. I think he will be a really good asset to the squad.”